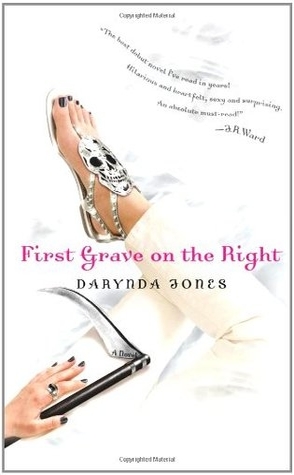 This whole grim reaper thing should have come with a manual.Or a diagram of some kind.A flow chart would have been nice.
Charley Davidson is a part-time private investigator and full-time grim reaper. Meaning, she sees dead people. Really. And it's her job to convince them to "go into the light." But when these very dead people have died under less than ideal circumstances (like murder), sometimes they want Charley to bring the bad guys to justice. Complicating matters are the intensely hot dreams she's been having about an entity who has been following her all her life...and it turns out he might not be dead after all. In fact, he might be something else entirely. But what does he want with Charley? And why can't she seem to resist him? And what does she have to lose by giving in?
With scorching-hot tension and high-octane humor, First Grave on the Right is your signpost to paranormal suspense of the highest order.

First Grave on the Right by Darynda Jones is the first book in the Charley Davidson series. I’ve seen this series over the years and considered reading it a number of times, but the comparisons to the Stephanie Plum series by Janet Evanovich turned me off. While I liked the first few Plum books, her constant ineptitude and the love-triangle got old fast. When my book club chose this I figured it was an opportunity to see for myself how “Plum-like” the series really is.

The writing was really great. I easily fell into the story, though the “sassy” and “sarcastic” quips of the main character were kind of annoying. That only got worse as the book went on. She had a zinger for everything, and it felt really forced. I didn’t find her charming or cute, but annoying. Did she take nothing seriously? Also, the obsession she had with a boy from her past – after a single brief encounter where he was a total bastard – didn’t make sense. Why was she so interested in him? It had shades of a “fated-mates” type thing, but it didn’t work very well in context.

I enjoyed the investigative parts of the story, but they were few and far between. The majority of this book was her either lusting after a shadowy figure from her dreams or obsessing over this boy she met once as a younger girl.

There were shades of a good story here, but most of it got lost behind the dumb sarcasm and crazy amount of lust/obsession she felt for this total stranger/creepy being. I may try another book in the series to see if it gets better.