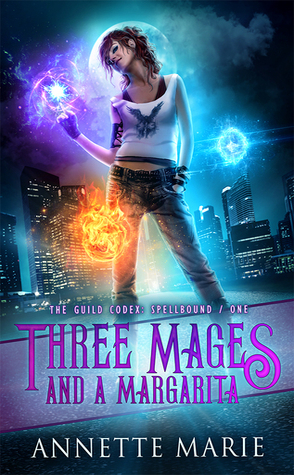 Broke, almost homeless, and recently fired. Those are my official reasons for answering a wanted ad for a skeevy-looking bartender gig.

It went downhill the moment they asked for a trial shift instead of an interview--to see if I'd mesh with their "special" clientele. I think that part went great. Their customers were complete jerks, and I was an asshole right back. That's the definition of fitting in, right?

I expected to get thrown out on my ass. Instead, they ... offered me the job?

It turns out this place isn't a bar. It's a guild. And the three cocky guys I drenched with a margarita during my trial? Yeah, they were mages. Either I'm exactly the kind of takes-no-shit bartender this guild needs, or there's a good reason no one else wants to work here.

So what's a broke girl to do? Take the job, of course--with a pay raise.

--Note: The three mages are definitely sexy, but this series isn't a reverse harem. It's 100% fun, sassy, fast-paced urban fantasy.
Tori has no problem getting herself into trouble in every book in the Guild Codex series, but each one is a complete adventure--no cliffhanger endings.

--THE GUILD CODEX: SPELLBOUNDThree Mages and a Margarita (#1)Dark Arts and a Daiquiri (#2)Two Witches and a Whiskey (#3)

Three Mages and a Margarita (The Guild Codex: Spellbound #1) by Annette Marie is available for Kindle Unlimited. I purchased the audio add-on, which is narrated by Cris Dukehart. I enjoyed the narration. I found this in a Recommended Reads thread on the Ilona Andrews blog. I want to preface this review by saying I do not like “campy” romance novels. I’m okay with funny, but campy doesn’t work for me.

Tori is attending college and sleeping on her brother’s couch after a recent move to the city. She’s gone through 6 jobs in the past few months because she has a hard time holding onto her temper. After getting fired from her latest job, she stumbles into a bartending position. She figures for sure she’ll get fired after she throws a drink in a customer’s face, but to her surprise they offer her a position. It ends up being too good to be true…they’re a Mages Guild, and serve only magical clients. Something the rest of the world doesn’t know about.

I liked the premise of this novel and I thought the Mages Guild and paranormal characters were interesting. I did not like the heroine. She should have been very relatable since she was feeling displaced without a place of her own to live and was struggling to make ends meet as she attended college. Where she lost me was her attitude and how quick she was to violence.

View Spoiler »The book opens with her working a shift as a server in a restaurant. One of her customers tries to “scam” the restaurant by pretending she didn’t get protein on her pasta dish. Instead of rolling her eyes and fetching the extra protein, she calls the woman out. When the customer starts throwing a fit about it, she says she’ll get the manager, but keeps engaging and arguing. It all culminates in the customer tipping her drink tray over onto her, which causes her to “lose her temper” and whap the woman upside the head with her tray.

This is a mundane human living in a mundane human world. The paranormals don’t come into play until later in the book. This behavior is so far outside of acceptable I can’t even. Getting the customer blacklisted? Yes. Refusing to serve the customer? Yes. Actually physically assaulting her? No, no and no. « Hide Spoiler

I almost quit reading then, but I though perhaps it would get better. As I said, I enjoyed the world and the other characters, but I think she actually got worse as the book when on. I won’t be continuing the series.