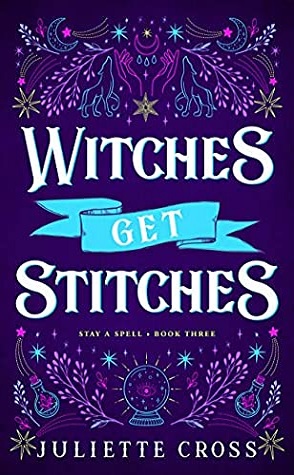 Violet Savoie has a plan. A dream, rather. To open her own tattoo shop, which caters to supernaturals in need of permanent charms. As a powerful Seer, she has the potent magic to cast every kind of spell. Except the kind to give werewolves control over their beastly side. And her business partner Nico needs help in the worst kind of way.

Nico Cruz has a secret. A motive, rather. To subtly stalk and seduce Violet until she finally recognizes they are fated to be together. Ever since their heated encounter in Austin on New Year’s Eve two years earlier, he’s been dying to get his hands—and his tongue—back on her body. He knows a woman like Violet can’t be courted in the usual way. Luckily, Nico has no scruples about misbehaving to get what he wants.

But when his former pack roams into town, and an old friend is far too interested in Violet, his focus shifts to the threat venturing into his territory. Nico may come across as the quiet, broody one, but the intruders are about to regret stepping foot in New Orleans. And when Violet goes missing, no charm or spell can keep Nico’s wolf at bay.

Witches Get Stitches is the third book in the Stay a Spell series by Juliette Cross, which features the Savoie sisters, powerful witches who own a bar in New Orleans. Nico and Violet had a connection in the first book, Wolf Gone Wild, and I was really excited to read more about them.

Violet is a powerful seer. She also has a unique gift – she can imbue tattoos with spells. She goes into partnership with Nico in a tattoo shop as she works on refining her craft. She and Nico had a passionate encounter, but she did a divination for herself and realized he wasn’t the one, so she’s been keeping him at arms length.

I have to say, Violet frustrated me. She acted very immature about her attraction to Nico. I wish she’d been more open and honest with him, instead of just ghosting him, or picking fights for no reason.

Still, I liked the underlying message about inclusion, and the way she and Nico changed things for the werewolves. I’m looking forward to the next book in the series.