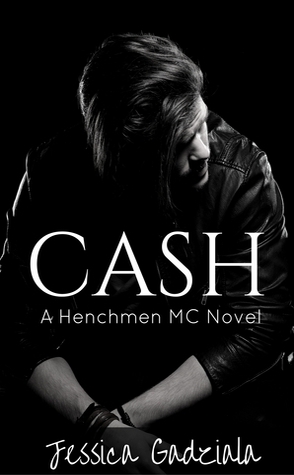 The Henchmen return, this time with CASH as our leading man.
CASH
My life has been about three things- brotherhood, good times, and women. Easy. Nothing complicated. That was until Willow Swift came barging back into my life, face bloodied, banging at the gates of The Henchmen compound calling in a favor owed. Now a marker is a marker and I had to make good, but if there was one woman in the world I didn't need in my life, it was the hard-as-stone, hot-as-sin Willow Swift and whatever mysterious ghosts from her past that were haunting her present.
WILLOW
My life has been nothing but two things: hard and complicated. The last person I wanted in my business was the notorious love-em and leave-em Cash, but I needed help and he was the only one I could lean on without worrying about him finding out about my past. But I was starting to wonder if maybe he was his own kind of dangerous bent on tearing down some things I had long since learned were not possible for me- like falling for a guy I could not, ever, let see the real me.
While this can be read as a stand-alone, you will get more out of this book if you read "Reign" and "Monster" first.

As VP of the Henchmen MC, Cash lives for the good times. He is always having fun & he doesn’t apologize for it. When Lo herself comes to ask the Henchmen for help, they can’t turn her away. They owe her and Hailstorm a favor. Lo is at the compound for help. She doesn’t care who helps her, as long as it’s not Cash. Ha. Cash is instantly attracted to Lo, but he is determined not to get involved with her. The last thing he needs is the leader of Hailstorm in his bed. Again…ha.

Lo is a badass. She runs Hailstorm like it’s the military. Because of that, her people are some of the most feared in Navesink Bank. When Lo’s past comes to haunt her, she has nowhere left to go. Lo was a combination of so many things. Sweet, fierce, witty, and beautiful. She loves romance novels because she’s a romantic at heart. That doesn’t take away from the fact that she’s one of the most dangerous people in Navesink Bank.

I really ended up liking this book. I thought the whole manwhore thing would turn me off Cash, but it didn’t. He’s so self-deprecating that it was hard not to like him. In the end, he would do anything to protect Lo from her past. Anything to protect the woman he loves.