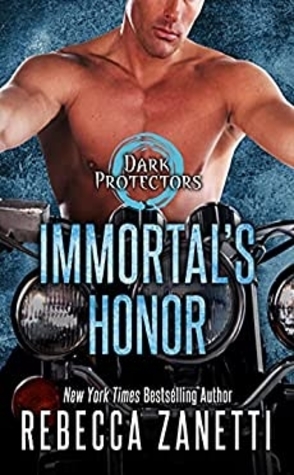 From award-winning author Rebecca Zanetti comes the newest wildly thrilling Dark Protectors novel with an immortal hero to die for.

When Vampire-Demon Sam Kyllwood discovers he’s the keeper of some mysterious circle, he laughs it off. When he finds out that his younger brother is supposed to fight to the death in said circle, he snaps right to furious. And that’s before he starts uncontrollably making things explode —it turns out it’s never too late to develop deadly new immortal abilities. But even those explosions are nothing compared to what happens when he tries to handle a very suspicious, brilliant and beyond sexy human female whose piercing eyes ignite a heat that rages deliciously outside even his unbreakable control…

Honor McDovall is one of the best interrogators Homeland Security has ever had. But no matter how well she appears to fit in, her mystical gifts are slowly driving her mad. She doesn't understand them, she doesn't want them, but for now, she'll use them to detect and defeat danger until she completely loses her mind. Unfortunately, her job brings her face to face with the deadliest man she's ever met—and she senses Sam is even more gifted than she is. Yet once they kiss, she realizes he's also more dangerous than the enemies suddenly coming from every direction. Good thing they both like to play with fire . . .

Immortal’s Honor is the 14th book in Zanetti’s Dark Protector series. I’ve been a diehard fan of this series since I first discovered it. While there are some books in the series that I like over others, I still have liked all the books. I honestly don’t think there is one book in this series that I did like.

Sam Kyllwood was introduced around book 5 or 6 (I could be wrong here). He’s always been a fascinating character and I am thrilled that we finally got his book. After his niece, Hope, was born the prophets of the Realm pulled Sam aside and told him that Hope was supposed to go through a ritual to become the Keeper. Hope would have died so Sam offered himself up. He doesn’t know what being the Keeper is all about, but he would do anything for his niece if it would save her life. The problems that arise after the ritual are problematic. Sam can’t stop blowing things up. Not because he wants to, but because he can’t stop himself. There is also being pulled into alternate dimensions which is causing a problem. Then he meets Honor McDovall.

Honor is called in by Homeland Security when Sam gets detained by the police after one of the explosions. She’s instantly attracted to Sam, but was properly horrified since he’s obviously a criminal. She’s one of the best investigators that Homeland has and it’s because of the gift that she barely acknowledges she has. She can tap into brain waves and get the truth out of anyone. Anyone but Sam that is. She can’t get a read on Sam, though she knows he is dangerous as all get out.

I loved Honor. She was so practical. When Sam kidnapped her, she took it in stride and didn’t stop trying to get away. I loved that about her. She did what I hope that I would do. She tried to escape. I’m so used to books where the heroine just accepts that they’re kidnapped and that’s that. Honor didn’t care how attracted she was to Sam. She thought he was a psychopath. It’s only when she is suddenly thrust into Sam’s world that she realizes how wrong she was about him. Somehow Sam gives Honor his curse of blowing things up. He doesn’t know how he did it nor does he know how he’s going to help her.

Sam and Honor were fire. This is one of my favorite installments of this series. I love how the arc of the story over the last few books has progressed. I’m really, really, really looking forward to Garrett’s book. It’s going to be amazing.