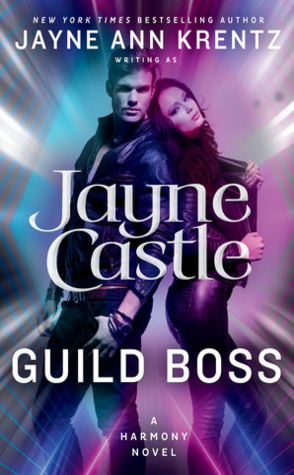 Welcome to Illusion Town on the colony world of Harmony—like Las Vegas on Earth, but way more weird.
Living in this new, alien world doesn’t stop the settlers from trying to re-create what they’ve left behind. Case in point—weddings are still the highlight of any social calendar. But it’s the after-party that turns disastrous for Lucy Bell. Kidnapped and drugged as she leaves the party, she manages to escape—only to find herself lost in the mysterious, alien underground maze of glowing green tunnels beneath Illusion Town. She’s been surviving on determination and cold pizza, scavenged for her by a special dust bunny, when help finally shows up.
Gabriel Jones is the Guild Hunter sent to rescue her, but escaping the underground ruins isn’t the end of her troubles—it’s only the beginning. With no rational reason for her abduction, and her sole witness gone on another assignment for the Guild, whispers start circulating that Lucy made it all up. Soon her life unravels until she has nothing left but her pride. The last thing she expects is for Gabriel Jones to come back to town for her.
The Lucy that Gabriel finds is not the same woman he rescued, the one who looked at him as if he were her hero. This Lucy is sharp, angry, and more than a little cynical—instead of awe, she treats him with extreme caution. But a killer is still hunting her, and there aren’t a lot of options when it comes to heroes. Despite her wariness, Gabriel is also the one person who believes Lucy—after all, he was there. He’s determined to help clear her reputation, no matter what it takes. And as the new Guild Boss, his word is law, even in the lawlessness of Illusion Town.

Gabriel Jones was standing so close she could feel his body heat and an aura of energy. That was reassuring. It was also disconcertingly intriguing. Her senses stirred.

He looked formidable and dangerous, but he had very nice shoulders. Everything about him radiated power and control. She liked his amber-brown eyes. Fierce but not in an intimidating way, at least not at the moment. More like the eyes of a man who has been looking for someone for a very long time and has just found her.

He studied her while she munched the pizza.

“I take it the after-party didn’t end well,” he said.
She glanced down at the crushed skirts of her long gown and sighed. She didn’t have a mirror, but she knew she probably looked as if she had spent a hard night in a dark alley. Possibly several nights. Time had become fluid. That happened when you got lost in the Underworld. There was no day or night in the tunnels. The maze of quartz corridors and chambers radiated an eerie acid-green light day in, day out. As far as the experts could tell, they had been doing so since the long-vanished Aliens had disappeared.

“The after-party was a disaster,” she said. “Long story.”

“When did the dust bunny show up?” Gabriel asked.

“I don’t know. I made it to this chamber and collapsed. The dust bunny appeared at some point. I’ve seen dust bunnies from time to time in the ruins but I’ve never had one approach me. I could tell he expected me to follow him but I . . . couldn’t. He vanished. I assumed I’d never see him again. He came back with a pizza. That’s when I named him Otis. I know he’s been trying to lead me back to the surface, but I can’t get through the psychic gate blocking the door.”

Gabriel glanced at the entrance. “I didn’t have a problem entering.”

“Neither did I, obviously.” She glared. “It’s getting out that’s the big issue here. Do you think I’d still be hanging around in this horrible chamber if I could break through the barrier?”

Gabriel glanced at the entrance again. When he switched his attention back to her, there was a thoughtful expression in his eyes.

“Let’s hope you can get out,” Lucy said.

She sounded pissed off, but she didn’t care. It was probably not a nice way to treat the man who said he had come to rescue her, but she didn’t care. She was irritated, because she was pretty sure she knew where the conversation was headed. Gabriel—assuming he was real—was concluding she was delusional because she had spent so much time in a strong paranormal environment without the steadying influence of nav amber.
What really annoyed her was that he was right. True, she wasn’t delusional all the time, but she was definitely suffering recurring bouts of nerve-jangling visions. Deep down she was terrified that she was in danger of getting lost in a world of paranormal nightmares. When she got scared, she got mad.

Otis finished the last of his pizza and chortled.

The dust bunny resembled a large wad of dryer lint. He looked adorable because only his innocent baby blue eyes and the tips of his ears were visible at the moment. His second set of eyes, the ones he used for hunting, were closed and hidden by his gray fur. Dust bunnies were cute and cuddly. Until they weren’t. As the saying went, by the time you saw the teeth, it was too late.

Lucy finished the last of the pizza slice, dusted crumbs off her hands, and looked at Gabriel. “How did you find me?”

“Finding people who get lost down here is one of the things I get paid to do,” Gabriel said. “Illusion Town doesn’t have its own Guild yet, so the local authorities coordinate with the Cadence organization. When they realized you had vanished into the tunnels, the police asked us for assistance. I pulled the assignment.”

She took another slice of pizza and narrowed her eyes. “I didn’t just vanish, you know. I was kidnapped.”

From GUILD BOSS published by arrangement with Berkley, an imprint of Penguin Random House LLC. Copyright © 2021 by Jayne Castle.

“I am often asked why I use a variety of pen names,” she says. “The answer is that this way readers always know which of my three worlds they will be entering when they pick up one of my books.”

In addition to her fiction writing, she is the editor of, and a contributor to, a non-fiction essay collection, Dangerous Men and Adventurous Women: Romance Writers on the Appeal of the Romance, published by the University of Pennsylvania Press. Her commitment to her chosen genre has been strong from the very beginning of her career.

“The romance genre is the only genre where readers are guaranteed novels that place the heroine at the heart of the story,” Jayne says. “These are books that celebrate women’s heroic virtues and values: courage, honor, determination and a belief in the healing power of love.”

She earned a B.A. in History from the University of California at Santa Cruz and went on to obtain a Masters degree in Library Science from San Jose State University in California. Before she began writing full time she worked as a librarian in both academic and corporate libraries.

She is married and lives with her husband, Frank, in Seattle, Washington.