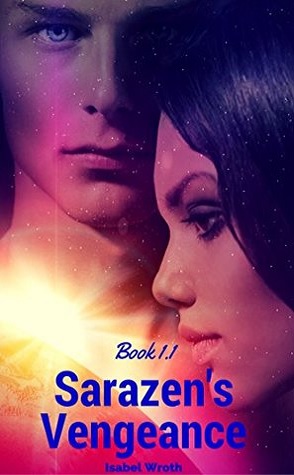 Book 1.1 of the Sarazen Saga This book is part of a SERIES. It could be read alone and enjoyed as is. Suggested to be read following Book 1, Sarazen's Claim. There is a happy ending, but as this is part of a SERIES, the ever after part comes later. Not a cliffhanger so much as a continuation.

Having gone from invisible engineering personnel, to one of the few remaining human survivors, Andi Starsong is struggling to acclimate to her new situation. She's been identified as a potential mate by one of the hulking Sarazen warriors, and if that wasn't terrifying enough, he's come to claim her.

Ohlen's little mate is terrified of him. Despite having done everything he can think of to put her at ease, Andi shies from him each time he so much as glances his way. He can no longer deny the roaring of his beast, the instinct that tells him she is in danger. He has no choice. He must claim her.

When the warship reaches Sarazen territory, Ohlen and Andi must navigate their blossoming bond and the danger of the treachery brewing within the pride. Treachery that could destroy more than just their bond.

There is a lot of dark content in this series. Please review the Content Warnings before reading this review and/or the series.

Sarazen’s Vengeance by Isabel Wroth is the 2nd book in the Sarazen Saga. Originally this was listed as a 1.1 novel, but the author updated it recently. This story starts out concurrently with the previous, which means there is a lot of overlap in the story. I felt like we got pretty much everything we needed from the first book, so the overlap was just frustrating. Having said that, I liked Andi and Ohlen enough that I was able to read through it.

Andi has been brutalized her entire life. Every year on her birthday since her 16th, one of her superior officers corners her and rapes her. She is powerless to stop him aboard the Starsong, and being rescued by a giant warrior race isn’t exactly comforting to her. Especially when one of them claims she is his mate. But Ohlen isn’t like the other males she’s known; he’s kind and patient, and makes sure she feels safe and wanted. He’s also able to give her something no one else can – Strength. a transfusion of his blood will allow her to become a shapeshifter, which means she never has to be weak or powerless again.

I really loved how sweet Ohlen was with Andi. The other males were all kind of chauvinists, but Ohlen didn’t try to railroad Andi or keep secrets from her. He was open and honest from the beginning, and wanted nothing more than her to find happiness. I loved how she came to trust him, and how he was available to her at all times, because that’s what she needed.

Despite how cute they were together, I found the first part of the novel to be rather boring, since it was just a repeat of what we’d already read in the first book. Things picked up more when they went planet-side.