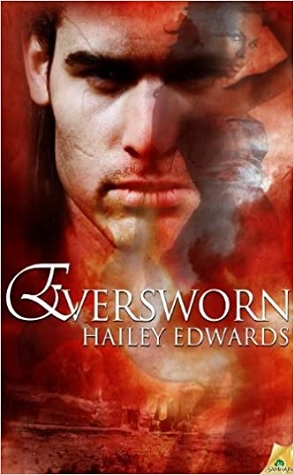 Steal the salt. Bind the grimoire. Escape the male.

When an exchange of stolen goods in the Feriana marketplace turns sour, Isabeau stumbles from the encounter bruised and laden with new orders to complete an even larger heist. With her child’s life at stake, there’s no room for error—or allies.

Armed with a lethal book of spells, she strikes a dangerous bargain with Roland Bernhard. Steal a shipment of salt from the Feriana colony, and she’ll have her freedom—and her daughter. It’s all she’s ever wanted. At least it was…until she runs into Dillon Preston.

Dillon is out of commission after a mine explosion, and itching for a distraction. He gets it when the female who saved his leg arrives at the colony with nothing but flimsy excuses and even flimsier attire. She’s after something, but is it him—or the salt?

Trapped in a desperate bid to gain true freedom, Isabeau is willing to sacrifice her life for her daughter’s, but Dillon has other plans. He wants a package deal, and he’s not willing to lose either female, even if it means the future king of Sere’s head will roll.

Warning: This title contains a heroine desperate to save her daughter and a hero determined to make them a family. It also includes wings, horns and other assorted appendages.

Eversworn (Daughters of Askara #3) by Hailey Edwards is the final book in the series. The plot of this book was my favorite of the three. I liked the setting and the intrigues and court politics. Though this doesn’t end in a cliff-hanger, some things are left unresolved so there may be another book in the future.

When Isabeau was purchased as a slave by a wealthy and powerful man, she thought her prayers had been answered. He was kind and treated her very well, and they quickly fell in love. It wasn’t until she became pregnant that he changed, and she realized he was not her savior at all. For several years, he has kept their daughter prisoner while Isabeau has been the a healer and right hand to Emma, liaison between the freed Avanti slaves and the Askarans. During that time, she has been forced to secretly feed information to him in exchange for proof that her daughter is alive and well. When her master ups the stakes and tells her she must steal the next shipment of a vital mineral, instead of just a small piece, she knows it means the end of her friendships and her time in Askara. Left with no other choice, she travels to a mining outpost with the intention of stealing the salt shipment, using the need to check on her former patient, Dillon, as her reason for the visit.

Dillon knows something is up with Isabeau. She wouldn’t visit for no reason, despite her claims she came to check on him and his injury. She’s either up to something or she finally decided to explore what’s between them. When her treachery comes to light, he knows he can’t let her get away…and not just because she’s a traitor. She’s his true mate, and it’s a compulsion to follow her.

Both Isabeau and Dillon made me angry at times. Isabeau didn’t have a lot of choices in her life, but I really didn’t like how everyone gave her a pass for all she’d done. Yes, they said their trust was broken, but that aside it was shrugs all around and “We get it”. I don’t really believe everyone would be so understanding, especially those who loved her and though of her as a friend. The romance was kind of sweet, except that part where she betrayed him at every turn.

The battle with her master and the political intrigues was much more interesting to me. I really enjoyed that aspect of the book, and as I said, this was my favorite of the three for that alone. While I’ve really loved some of Edwards other books, but this series isn’t my favorite. I doubt I’ll re-read them, and I’m not really interested in another book, if she’s planning to continue the series.