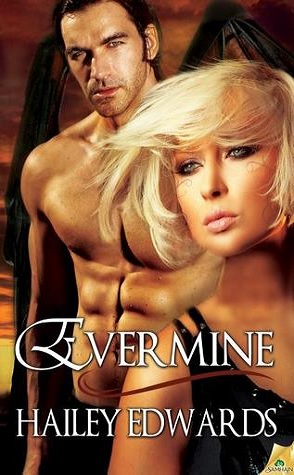 He can be a slave to his past…or allow her love to free him.

There’s such a thing as too much change. Emma’s sister is mated. Revolution is brewing in her home realm. The last straw: her would-be mate is back from the dead and back under her skin—yet when it comes to the last five years, he’s not talking.

Desperate for a chance to start her own life, she answers the queen’s call to ensure equality for all of Askara’s newly freed slaves. It’s the perfect opportunity to escape a heartbreak in the making named Harper.

Harper loses a piece of his fractured soul when Emma walks away. His lies were meant to protect her from torturous years that drove him to the point of madness. Instead, when he comes to her a year later to help avert a crisis in a freed-slave community, the wedge those lies drove between them is firmly in place.

As their new lives collide with old wounds, they race to stop a threat that could not only destroy the queen, but send Harper back to the hell he escaped. Emma must decide if the man she still loves deserves equal rights to her heart.

Warning: This title contains torn pants, ripped gowns, and sand in uncomfortable places. It also includes one overcompensating villain, one gnarly priest, and two battered hearts willing to give this thing called love one last chance.

Evermine (Daughters of Askara #2) by Hailey Edwards follows Emma, whom we met in the first book. I enjoyed her quite a bit in Everlong and was curious to see how things would turn out for her. Fair warning, this is a dark novel that deals with dark themes. Please review the Content Warnings before reading this book.

Emmaline was born into slavery. As the bastard daughter of the Queen of Askara’s consort, she was raised to be the personal slave of the princess Madelyn. They grew up as sisters, and Emma would do anything for Maddie. Now that Maddie has found her mate Emma knows she needs something more. When the evil Queen is overthrown by Maddie’s older sister and slavery is abolished, Emma agrees to return to Askara to act as liaison between the Avanti former-slaves and the Askarans. If that gets her away from her fated mate? All the better. She knows she can’t face Harper after the way she betrayed his memory when she thought he was dead, plus he refuses to share his past with her. It’s a recipe for disaster. But still, when Harper requests her help to uncover a plot against the new Queen, Emma knows she can’t refuse, even if being near him is nothing but torture.

Harper has always known Emma would be his. He meant to protect her by refusing to share his past with her; he never expected it to push her into leaving him. Now that they’re together again, he’s determined to prove to her that they belong together. Though he isn’t sure she can accept all of him, he knows he has to try.

This is a complex and multi-layered world. I highly recommend reading this series in order. A lot of the events that happen here are related to what happened in the first book.

I really liked Emma in the previous book. She faced things head on and wasn’t afraid to get in someone’s face if she needed to. That was true here as well, though she seemed less sure of herself at times. Plus, she had an addiction that I don’t really think was properly addressed.

View Spoiler » She was addicted to coffee on Earth, which for the Avanti is the equivalent of an alcohol addiction. She beat the addiction off-page, but she was fed another type of drug on-page. She suffered some side-effects of that, but then we didn’t hear about it again. I wish that had been explored more. « Hide Spoiler

Harper was a prisoner for 5 years. Literally kept in a cage and used and abused, he’s determined to give others better. He was a strong character and I loved how determined he was to save those he cared about. I didn’t necessarily love him and Emma together. They weren’t great about communicating, and her reasons for keeping him at arms length seemed forced at best.

I enjoyed the world and overarching storyline enough to immediately start the next book, but this isn’t my favorite series from Edwards.