In Brooke Burroughs’s endearing debut novel set in vibrant India, enemies turned allies encounter obstacles in an unexpected multicultural romance only to discover that in the end, love is love.

Emma has always lived her life according to a plan. But after turning down her boyfriend’s proposal, everything starts to crumble. In an effort to save the one thing she cares about—her job—she must recruit her colleague, Rishi, to be on her development team…only she may or may not have received the position he was promised. (She did.)

Rishi cannot believe that he got passed over for promotion. To make matters worse, not only does his job require him to return home to Bangalore with his nemesis, Emma, but his parents now expect him to choose a bride and get married. So, when Emma makes him an offer—join her team, and she’ll write an algorithm to find him the perfect bride—he reluctantly accepts.

Neither of them expect her marriage code to work so well—or to fall for one another—which leads Emma and Rishi to wonder if leaving fate up to formulas is really an equation for lasting love.

After a few beats of silence where they both ate a few bites of food and smiled at each other, Emma said, “Rishi. There’s something I want to say to you.” She took a drink of beer and leaned forward. “I just wanted to say I’m sorry for how things happened. With the transfer to the US not working out, and you not leading the project. I know it was disappointing for you, and you must have resented me, but I’m really glad you’re on the team and that we’ve gotten to know each other.”

Something seemed to crack inside Rishi’s chest. Or maybe soften was a better word. “I don’t think it was your fault, though. You don’t need to apologize.”

She nodded. “I know. It just really sucked for you. And you’re so great at your job. If you weren’t on the project, I don’t know what I would do.”

“Suffer with Kaushik as your lead dev?”

She rolled her eyes. “Oh my God, can you imagine?”

“Actually, no, I can’t. I mean, I can imagine the bodies that you’d leave behind in the wake of the Kaushik-Emma Armageddon, but . . .”

Emma laughed. “That’s totally what it would be. Rishi, what would I do without you?” Her hand crawled over to his and gave it a squeeze. He looked down at it and squeezed it back. A perilous squeeze. The most dangerous squeeze in history. Did she think that too? Because her fingers crumpled up and retracted, slinking back into her lap.

He wanted to say, Nothing. Don’t do anything without me. Let’s find out what this is. Let’s see where this goes. Who cares if it’s wrong or impossible or stupid? But he couldn’t. He couldn’t risk it. What if Emma was just joking? What if this was just how she was with everyone once they broke down her frosty exoskeleton? What if this wasn’t special, and he said or did something that would ruin the project or their relationship or his job?

Instead, he just downed the rest of his beer.

After dinner, they walked through the lamplit streets on the way back to their hotel. Rishi was acutely aware of his proximity to her. Their hands would accidentally graze as he leaned over to point out a church or some other architecture, and he craved the feel of her hand in his again. Trouble. That’s all this was.

Rishi held the door open for her when they arrived at the hotel. They stepped into the elevator and both stood against the wall, staring at the door. Was it hot in here? Had they turned off the AC in the elevator? Sweat broke out on his brow. The vision he’d had earlier of thrusting her up against the elevator wall and confessing his attraction sneaked up.

Or what would happen if he pulled her into his room and kissed her, his hands exploring what his eyes had imagined? What would she do if he pushed her against the corridor wall and let his mouth roam the expanse of her throat? He stared straight at the elevator door, not knowing what to do.

Time was running out. He’d never have this chance again.

His body was radiating heat like the sun to Mercury. Nine thousand watts per square meter. He needed her to rid his body of the excruciating warmth.

The tiny ding announced they had arrived at their floor. Rishi stood aside so Emma could get past. His thoughts fumbled as she walked toward her hotel door. He only had thirty seconds to plot his seduction, thirty seconds to concoct a plan. Or thirty seconds to do absolutely nothing. And wonder. For the rest of his life: What if? 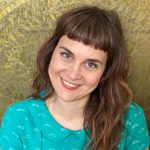 Brooke Burroughs has worked in the IT industry for over ten years and lived in India—where she met her husband—for three. Burroughs has experience navigating the feeling of being an outsider in a traditional, orthodox family. Luckily, she and her in-laws get along well now, but maybe it’s because she agreed to a small South Indian wedding (with almost a thousand people in attendance) and already happened to be a vegetarian with an Indian food–takeout obsession.

2 responses to “Sunday Spotlight: The Marriage Code by Brooke Burroughs”