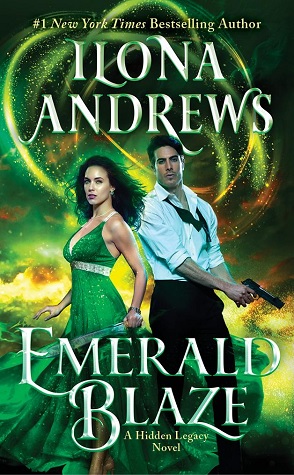 As Prime magic users, Catalina Baylor and her sisters have extraordinary powers—powers their ruthless grandmother would love to control. Catalina can earn her family some protection working as deputy to the Warden of Texas, overseeing breaches of magic law in the state, but that has risks as well. When House Baylor is under attack and monsters haunt her every step, Catalina is forced to rely on handsome, dangerous Alessandro Sagredo, the Prime who crushed her heart.

The nightmare that Alessandro has fought since childhood has come roaring back to life, but now Catalina is under threat. Not even his lifelong quest for revenge will stop him from keeping her safe, even if every battle could be his last. Because Catalina won't rest until she stops the use of the illicit, power-granting serum that's tearing their world apart.

Catalina Baylor is wrapping up an investigation for House Baylor Investigative Agency, her family’s PI firm, when she’s attacked by beasts she’s never seen before.  She discovers that they are a blend of mechanical and biological constructs that are controlled by magic, which aren’t supposed to be able to exist together.  Since she is the Deputy Warden of the State of Texas, she calls the Warden, Linus Duncan, and tells him.  He immediately instructs her to go to Montgomery Investigations, Inc. and take over a case.

The case involves the death of Prime Felix Morton from House Morton.  He was one of five Primes from different Houses that were working on a reclamation project. They were trying to reclaim The Pit, which is a flooded, swampy area in the middle of Houston.  Catalina must now interview the other four Primes to try to discover who killed Felix.  She certainly doesn’t expect to run into Alessandro Sagredo when she gets to MII, as she hasn’t seen him in six months, but that’s what happens.  Alessandro was hired by Lander Morton to kill whoever murdered his son, Felix, once the killer is exposed.

Catalina is determined to keep her distance from Alessandro, despite the fact that he’s resumed his bodyguard-of-the-Deputy-Warden duties.  Alessandro has discovered that a man that he has been after for years is now looking to kill Catalina, if not her whole family.  He’s going to keep Catalina safe if it kills him.

Catalina has to deal with her feelings for Alessandro, keeping herself and her family safe, dealing with her grandmother Tremaine who is a wolf in wolf’s clothing, and balancing her House duties as well as her Deputy duties.  It’s a lot, especially with finding out that there is something in the Pit that is sentient, and it plans on taking over Houston completely.

I love Ilona Andrews books.  Seriously, I’ve never read an IA that I didn’t like.  The world building alone rocks my world, then they add in some romance and boom, I’m hooked.  This book was another amazing addition to the Hidden Legacy series.

I really didn’t like Catalina the first time I read Sapphire Flames.  Amazing book, but I was on the fence about her.  The “I love you” when it came to Alessandro was out of nowhere and based on nothing, and I wasn’t feeling it.  I recently reread SF and Catalina grew on me.  I still didn’t like the “love” part of the story, and actually disliked Alessandro somewhat during the second read, but the book was still crazy good.

In Emerald Blaze all of that dislike went away.  Though it’s only been six months since the last story ended, I felt Catalina had grown.  Becoming Deputy Warden of the State of Texas, and working with Linus, did her a hell of a lot of good and I could see the changes in her.  Alessandro, as well, was a different person.  His snarky personality wasn’t completely gone, but he seemed to take life more seriously and he was actually open and communicative with Catalina.  Loved it!

The rest of the story, besides the romantic parts, was super great.  Not that they weren’t, but they weren’t the focus.  I love the creatures that IA comes up with and it blows my mind that their minds work like that! The fact that the Baylor family, as well as Alessandro, have to work out these puzzling details and use their wits and intelligence to solve whatever issues arise makes me like them and the book even more.

I can’t tell you much about it as that will completely ruin the story for you, but I highly recommend this book.  If you haven’t read this series yet you are definitely missing out!  Start with Burn for Me and don’t stop until you’re done with Emerald Blaze.  You can thank me later.