Happy Mother’s Day! I hope all of you moms (whether biological or otherwise) are relaxing and reading today.

I haven’t read Alexis Daria before, but the cover of You Had Me at Hola caught my eye and I’m totally intrigued by the blurb.

and The Kiss Quotient.

Leading Ladies do not end up on tabloid covers.
After a messy public breakup, soap opera darling Jasmine Lin Rodriguez finds her face splashed across the tabloids. When she returns to her hometown of New York City to film the starring role in a bilingual romantic comedy for the number one streaming service in the country, Jasmine figures her new “Leading Lady Plan” should be easy enough to follow—until a casting shake-up pairs her with telenovela hunk Ashton Suárez.
Leading Ladies don’t need a man to be happy.
After his last telenovela character was killed off, Ashton is worried his career is dead as well. Joining this new cast as a last-minute addition will give him the chance to show off his acting chops to American audiences and ping the radar of Hollywood casting agents. To make it work, he’ll need to generate smoking-hot on-screen chemistry with Jasmine. Easier said than done, especially when a disastrous first impression smothers the embers of whatever sexual heat they might have had.
Leading Ladies do not rebound with their new costars.
With their careers on the line, Jasmine and Ashton agree to rehearse in private. But rehearsal leads to kissing, and kissing leads to a behind-the-scenes romance worthy of a soap opera. While their on-screen performance improves, the media spotlight on Jasmine soon threatens to destroy her new image and expose Ashton’s most closely guarded secret.

“Let’s take it through with the lines,” the intimacy coordinator told Ashton, and he took his spot at the counter.

When Vera gave the signal, Ashton slid closer to Jasmine. With his arms crossed over his chest, he tapped into Victor’s easy charm—something he wished he could employ more in his real life—and grinned. “Do you think I have a chance at winning?”

Jasmine looked up at him from under long lashes. She pursed her lips before she answered, like she was thinking about what he’d said.

“I think so. If you remember every step of the recipe, execute it all perfectly, and finish on time.”

He raised his eyebrows. “No pressure.”

She softened then. Nothing obvious, but still, a noticeable easing of her stance, her tone, her expression. Her words were serious, not sarcastic, as she repeated, “No pressure.”

This was it. Time for him—Victor—to make his move. Uncrossing his arms in a slow movement, Ashton raised his hand.

Suddenly, Vera was there, close to them.

“Stay in the moment,” she said in a hushed voice. She took Ashton’s hand and gently brought it to Jasmine’s cheek.

Ashton positioned his hand on the side of Jasmine’s face the way Vera directed it. His fingers slid over Jasmine’s jaw to curl around the side of her neck, under her ear. Her skin was so warm. He had a flash of pressing his mouth there. How would she feel against his lips?

“Say your line.” Vera’s words were faint, barely interrupting the tension spinning out between the three of them.

Ashton dropped his voice. “You have something here.” With Vera’s hand over his, Ashton’s thumb came to rest on the curve of Jasmine’s cheekbone. Vera gave the digit a little nudge, and Ashton stroked Jasmine’s cheek in a soft, gentle glide. Then Vera shifted, resting her hands on Jasmine’s upper arms. Slowly, Jasmine rose up from her elbows. Her dark eyes stayed locked on Ashton’s, even as Vera moved her like a doll, or a puppet. But Vera wasn’t controlling them—no, she was guiding. They’d given her permission, given each other permission. They’d consented to this, and there was power in that. Vera was part of this.

And damn if it wasn’t incredibly intimate. 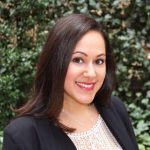 Alexis Daria is a native New Yorker and award-winning author writing romance and mystery stories about successful Latinx characters and their (occasionally messy) familias. Her debut Take the Lead won the 2018 RITA® Award for “Best First Book” and was one of the “Best Romance Novels of 2017” in The Washington Post and Entertainment Weekly. Her next release, You Had Me at Hola, will be out July 7, 2020. Alexis has a BFA in Computer Arts, and her super powers include spotting celebrities in NYC, winning Broadway ticket lotteries, and live-tweeting from @alexisdaria.

5 responses to “Sunday Spotlight: You Had Me at Hola by Alexis Daria”