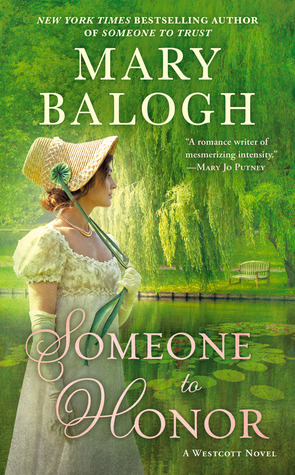 Abigail Westcott's dreams for her future were lost when her father died and she discovered her parents were not legally married. But now, six years later, she enjoys the independence a life without expectation provides a wealthy single woman. Indeed, she's grown confident enough to scold the careless servant chopping wood outside without his shirt on in the proximity of ladies.

But the man is not a servant. He is Gilbert Bennington, the lieutenant colonel and superior officer who has escorted her wounded brother Harry home from the wars with Napoleon. He's come to help his friend and junior officer recover, and he doesn't take lightly to being condescended to - secretly because of his own humble beginnings.

If at first these two seem to embody what the other most despises, they will soon discover how wrong first impressions can be. For behind the appearance of the once grand lady and once humble man are two people who share an understanding of what true honor means, and how only with it can one find love.

Gil is an army man who helps his weak and injured friend, Harry Wescott, home he needs Abby Westcott, Harry’ sister, but isn’t really interested in Abby – he’s more focused on getting his daughter back.

While Gil was in the war, his wife had a baby. He then finds out that she had taken the child to her parents and left her there. The child’s mother then went off flitting from house party to house party and eventually her reckless attitude gets her killed. Gil wants nothing more than to get his daughter back, but the grandparents believe a bunch of lies that Gil’s wife had told about him, and they’ll do anything to keep the child from him.

Gil was born illegitimate. His mother was a washerwoman and his father was a noble. While they didn’t have a much, she always provided for Gil. His father wasn’t in the picture and Gil resents the man for making him and his mother live in poverty. Of course, as the book goes on, we find out that sometimes all is not as it seems.

Gil and Abby come together to get Gil’s daughter back but other than that I felt no real romance between the two of them. Gil was surly and contrary, and Abby was just kind of blah. I was actually bored through most of this book, which was a bit of a surprise since I’ve liked the previous Wescott books so much.

I was interested in the whole daughter issue, (it’s what kept me reading) but it ended up being anti-climactic. There was a lot of stress thinking how it was going to work out and it kind of had me on the edge of my seat. Then, of course, when they actually got to that point it was a bit of a letdown. I don’t know if I was expecting this big fight, or what, but it just wasn’t very exciting.

Balogh is a good author, but I think she really missed the mark on this one. I’m not sure if she wasn’t into the characters as much as previous books, or maybe she was trying to knock it out quickly, but it just didn’t work for me

2 responses to “Guest Review: Someone to Honor by Mary Balogh”