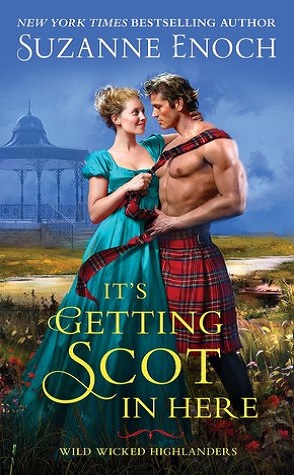 HAPPILY-EVER-AFTERLondon socialite Amelia-Rose Baxter is nobody’s fool. Her parents may want her to catch a title, but she will never change who she is for the promise of marriage. Her husband will be a man who can appreciate her sharp mind as well as her body. A sophisticated man who loves life in London. A man who considers her his equal―and won’t try to tame her wild heart...

IN THE HIGHLANDSRough, rugged Highlander Niall MacTaggert and his brothers know the rules: the eldest must marry or lose the ancestral estate, period. But Niall’s eldest brother just isn’t interested in the lady his mother selected. Is it because Amelia-Rose is just too. . . Free-spirited? Yes. Brazen? Aye. Surely Niall can find a way to soften up the whip-smart lass and make her the perfect match for his brother for the sake of the family.

JUST GOT A WHOLE LOT HOTTER.Instead it’s Niall who tempts Amelia-Rose, despite her reservations about barbarian Highlanders. Niall finds the lass nigh irresistible as well, but he won’t make the mistake his father did in marrying an Englishwoman who doesn’t like the Highlands. Does he have what it takes to win her heart? There is only one way to find out...

The Earl of Aldriss and his London wife head to his home in Scotland after they marry. She hates Scotland. He hates London. The wife has three sons and all is good, until she has child four, who is a girl. The wife declares that there’s no way she’s bringing up a daughter in the wilds of Scotland because it’s completely barbaric. She takes off for London with the girl, leaving her husband and three sons on their own. Oh, and she controls all the money. She agrees to keep sending money as long as hubs lets her leave.  Nice mom. Not. Her oldest is 12 years old and the other two just a few years behind that. What impressionable ages to just up and leave! This pissed me off.

Seventeen years have gone by and the absent mom decides that her sons have to come to London and get married or shall stop sending money. What kind of asinine plan is that? Not only that, but one of those wives need to be of her choosing.   Does she really think that if they marry women from London that they’ll stay? I don’t think so. Oh, and on top of that they have to get married before their younger sister or they lose everything. The sister is already engaged, so they are on a strict time limit.

Anyway, the woman the mom chooses for the oldest son isn’t his cup of tea. Niall, the second son, ends up escorting her places saying that Coll, the oldest, will be there anytime. Of course the more time Niall and Amelia-Rose spend together the closer they get.

I really liked both Niall and Amelia-Rose. I thought that individually they were great characters, but together they really were something special. The mom’s intentions were horrible, but it ended up working out for the both of them.

I really liked this book and I am very much looking forward to the next book in the series.