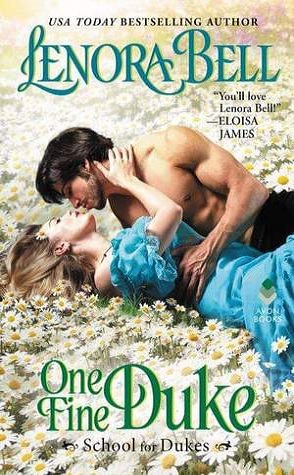 Raised in the countryside by her overprotective uncle, Miss Mina Penny's dream of a triumphant London season is finally here. She determined her perfect match long ago: Rafe Bentley, the wickedest rake of them all. There's only one very large, very unyielding obstacle: Rafe's brother Andrew, the reclusive Duke of Thorndon.

This was supposed to be simple. Duke goes to London. Duke selects suitable bride. Love match? Not a chance. But when Drew meets Mina, she complicates everything. How can a lady armed with such beauty and brains fall for his irresponsible degenerate of a brother? Drew vows to save her from heartbreak and ruin, no matter the cost.

But Mina is no damsel in distress. She's daring, intuitive, passionate...and halfway to melting Drew's cold heart. And although Mina thought she knew exactly what she wanted, one breathtakingly seductive kiss from Drew changes everything. Now Mina must decide between long-held dreams and dangerous new desires. Could her true destiny lie in the arms of a duke?

Mina wants nothing more than an adventure.  Her parents were spies but they were killed when she was just 10 years old.  She didn’t really know her parents as they were always gone, but she remembered how glamorous her mother was and wants to be like her. After her parents died Mina lived with her uncle who was incredibly protective.  Her uncle is a spy master and his nemesis had killed Mina’s parents as well as the uncle’s wife and daughter.  Because of this he was really over-protective.  When Mina finally talks her uncle into a Season in London Mina is very excited and wants an adventure.

While Mina just wants to have fun, her uncle has put together something called The Duke Dossier.  It’s info about every available duke currently in London. After talking it out, however, the uncle decides that the only duke that will do for Mina is the Duke of Thorndon.  He is a man who used to be a rake but is now a stodgy man who lives in the country, or so Mina thinks.  Mina is sick of the country and wants to live in London full time – to be a spy of course!  When she finally meets, and dances with, the duke she borders on rude because she wants to put him off as much as possible.  She has no idea it will only pique his interest.

Mina is actually interested in the duke’s brother.  She knows she can have a marriage of convenience with him and since he’s one of her uncle’s spies, she can share that part of his life as well. The duke isn’t thrilled with Mina being interested in his brother, as he wants her for himself.  When Drew, the duke, finds out that his brother is up to something, Mina and Drew decide to figure out what it is.  Drew to help his brother and Mina because she knows it has something to do with her uncle’s nemesis.  She wants the nemesis dead and plans to kill him herself.  As much time as the duke and Mina spend together, they couldn’t help but fall in love, but how can they be together when they want different things in life.

This was a cute book.  I thought at first that Mina was going to annoy me with all of her thoughts of adventure and spies and that she was going to be TSTL.  Fortunately that wasn’t the case.  While I didn’t adore Mina, I thought she was level-headed and intelligent.  I liked the romance between her and Drew and could definitely see them together.

I was a little put off by the author having Mina be ridiculously foolish when it came to facing the bad guy.  I mean there’s bravery and there’s sheer recklessness.  The author went too far in her rah-rah for girl-power. Don’t get me wrong, I would have rolled my eyes if it was a man being that reckless as well.

Overall I liked the book and thought it was cute.   A pleasant way to spend a bit of time.

One response to “Guest Review: One Fine Duke by Lenora Bell”