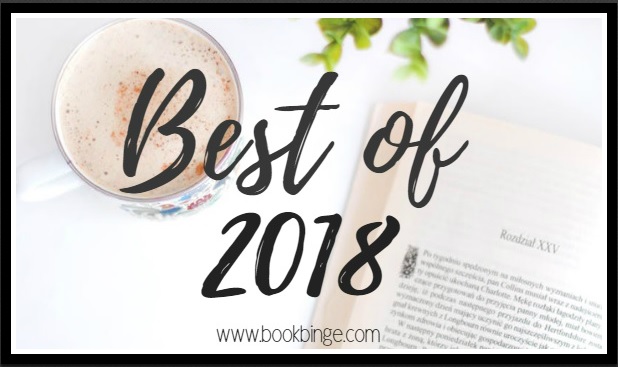 Romance readers are no strangers to series. We follow along gleefully from book to book, meeting and loving each new character that we meet. Here on Book Binge, we read a lot of series and here are our favorites from 2018.

Hidden Legacy series by Ilona Andrews: Holy shit though. This series blew all other series out of the water for me during 2018. I had no idea that I would love this series as much as I did. It was a combination of things that did it for me, but it was mostly Nevada. She was so kickass. Her love for her family was always front-and-center. She would do anything, sacrifice anything for her family. Adding Connor “Mad” Rogan into the Baylor family dynamic just makes for a good read.

Dark Protectors series by Rebecca Zanetti: This is one of those series that did it for me as a whole. There isn’t one book I can put my finger on that stood out. Well, there is one, but it was mostly all of them. The war between species also hooked me because, seriously, how can the humans be so fucking clueless? Would we be that clueless? Those are the things I ask myself as I’m reading. For real.

Us series by Sarina Bowen and Elle Kennedy: Okay, there were only two books in this series before it continued into a different series (of which I have yet to read), but these two books? Wow. Just, wow. I’m serious. I don’t exactly read m/m romance on a regular basis, but I really like these two authors. I knew they wouldn’t let me down. I was right. This series was seriously amazing. It’s a love story between two people. You forget that you’re reading about two men. For the most part.

The Perfect Gentlemen by Shayla Black and Lexi Blake: I just had damn good luck with writing duos last year. Honestly, I am going to check out more duos this year. This series was rooted in a bond between five boys that went to the same boarding school. Their bond follows them all the way into adulthood where one of them became President of the United States and one of them was murdered. Now they’re all trying to figure out whodunit.

Scorpius Syndrome series by Rebecca Zanetti: Yes, I have two Zanetti series on this list, which I didn’t even realize. The post-apocalypse world that she has built here is fascinating to me. When will resources run out? Will people finally band fully together against the President because he’s completely psycho or will he finally get his hands on Lynn? Will someone finally be able to bring a baby to term? I love dystopian romance and this is really well written.

Mystic Bayou by Molly Harper: I just can’t say enough about this series. I listened to the audios and the town and characters really came to life. I loved the zany humor and sweet romances.

The Others by Anne Bishop: Bishop is a fabulous talent, and I feel like she really shines with this series. I was fully immersed in the Courtyard and the lives of those who inhabit it. Bishop tackles heavy issues like racism and abuse, yet does it so expertly I didn’t feel preached to – or at.

Binti by Nnedi Okorafor: This Sci-Fi series was so well drawn I felt like I was there with Binti as she struggled between what she felt she needed to be fulfilled vs the expectations of her family. The world-building was wonderful and Binti herself really pulled me in. I highly recommend the trilogy.

Sins for All Seasons by Lorraine Heath: I’m loving the humor, wit and romance in this series. Each book features an unconventional set of characters that really drew me in and made the stories come to life.

Sins for All Seasons series by Lorraine Heath: This is probably the one series from 2018 that my entire book club agreed on. We read the first two books throughout this year and everyone loved both books. I’m very much looking forward to seeing where Lorraine Heath takes this series and I can’t wait to dig into my eARC of The Scoundrel in Her Bed.

Hidden Legacy series by Ilona Andrews: Every single book in this series is off the hook good. I adore pretty much everything from Nevada, Connor, Nevada’s family and all of the shenanigans that she gets into with Connor and then there’s all of the action she sees on her assignments? Love this series!

Mercy Thompson series by Patricia Briggs: Thanks to Holly, I picked this series up again this year and made some steady progress on it too. I am loving all things Mercy and Adam, and just Mercy in general. I love how she tries to mind her own business but keeps getting swept up in drama that’s not hers. I loved her attitude, her fierce determination to make it on her own and I love the people she surrounds herself with. I need to finish this series out and I will, I need to know about Adam’s ex trying to mess with him and Mercy’s relationship.

The Kiss Quotient series by Helen Hoang: I completely adored this book and loved seeing Stella and Michael come together in love. I can’t wait to get to know Michael’s cousin in the next book in this series. I’m so freaking anxious.

The McCabe Trilogy by Maya Banks: I had never read anything by Maya Banks until this past year and holy cow, her books are packed with drama and emotions and just everything. This series, in particular, made me super happy but then the characters made me want to cut a bitch and then I ugly cried in the end in every single book. This series is great!

Honorable Mentions: The Girl Meets Duke series by Tessa Dare, To All the Boys I’ve Loved Before series by Jenny Han, and the Alpha & Omega series by Patricia Briggs.

What were some of your favorite series that you read in 2018?