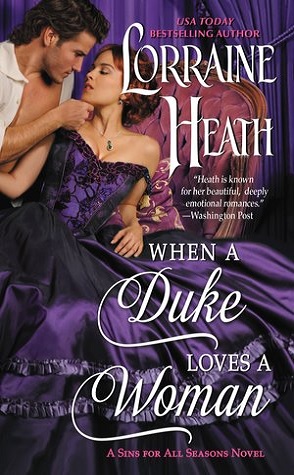 Gillie Trewlove is a tavern owner in Whitechapel with no plans to ever marry.  She loves her tavern and she knows if she got married it would be handed over to her husband. Not happening.  One night she’s taking out the trash in the back alley and comes across a man being robbed and assaulted. She scares off the attackers but the man is in no shape to be moved.  She calls for a physician and takes the man to her flat above the tavern.  She tries everything she can to talk the doctor into letting her put the man in a cab to cart him away, but the doctor says he can’t be moved.  Despite Gillie’s misgivings of having a man in her sacred space she finds that she enjoys taking care of him.  When he wakes up the two talk and find that they like each other a great deal.  A bond is formed while the man, who identifies himself as Thorne, is recovering and Gillie finds herself attracted to him in a way that she’s never been attracted to a man before.

Thorne was left at the altar the morning he was attacked.  He was told that his bride, when she ran, took a cab to Whitechapel.  He was there trying to find her but was also drowning his sorrows along the way – that’s why the ruffians got the better of him in the alley. While he hated being left at the altar he wasn’t in love with his bride-to-be, it was a marriage contract made when she was born.  That doesn’t mean that Thorne doesn’t want to find her to find out what the heck happened.

Once Thorne is recovered Gillie sends him on his way never expecting to see him again. She’s surprised when he returns to her tavern the next night and shocked when he identifies himself as Antony Coventry, the ninth Duke of Thornley.  Thorne keeps returning to the tavern and the two build a friendship but there’s something always underneath it – attraction and admiration. Gillie starts to help Thorne look for his runaway bride and this forces them to spend more time together.  After a while they can’t deny their attraction to each other any longer and end up in bed.  Gillie knows that she can never be with Thorne permanently and she refuses to be his mistress, which he wouldn’t want anyway.  Thorne loves Gillie but he made a promise years ago to his dying father that he would marry and add land to the dukedom.  Both want what they can never have.

Ok, I wasn’t all that thrilled with Gillie’s character in the previous book so I truly didn’t know what to expect when I started WaDLaW.  I’m happy to say that I was pleasantly surprised.  I absolutely loved Gillie in this book!  She was strong and independent, yes, but she was also a woman who could be vulnerable and hurt.  She tried to hide that fact but it came out.  She was also an amazingly giving person.  She would walk through Whitechapel and give out wooden coins to those who she thought needed it which they could trade for soup if they came to her tavern. But she also said she’d never turn anyone away who was hungry – even if they didn’t have a wooden coin.  I loved that! I loved that this career-minded woman was also open-hearted and thoughtful.

Thorne was a good guy and perfect for Gillie, imho.  He was aware of his own responsibilities and didn’t shirk them, but he always made time to be with Gillie even if that included serving pints in her tavern and cleaning up after closing.  The relationship between the two was so strong but I honestly couldn’t see how Heath was going to get them together.  I’m happy to say that she gave me a wonderful HEA that was completely believable!

I definitely recommend this book.  I’ve only had 3 5-star reads in 2018 so far and two of them were the books in this series – what does that tell you?

3 responses to “Guest Review: When a Duke Loves a Woman by Lorraine Heath”