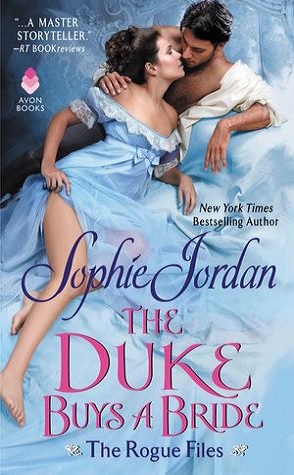 Marcus, the Duke of Autenberry, has gotten out of London and he’s more or less wandering the countryside trying to escape his woes. (I’m assuming his woes occurred in previous books but I didn’t read the previous books so I’m not sure.) He comes upon a village green one day and sees that there is an auction – of a woman!  He’s disgusted by the proceedings and when it looks like a disgusting man might get the girl, he bids a ridiculous amount and wins her for himself.  He doesn’t realize that this is a bride auction.  By buying her he is now her husband.  Of course he denies that with everything he is and sets off with the girl to his estate in the Highlands.  He says he’ll make her his housekeeper and pay her well.

Alyse’s dad died when she was just 14 years old – seven years ago.  He made an arrangement with a man with a ton of children for Alyse to marry him and take care of his kids in exchange for taking care of Alyse.  While she’s technically been his wife for years she’s really been a servant, raising his kids and taking care of his house.  The bride auction is a way to “divorce” her current husband and marry her long-time friend, Yardley.  Only when they arrive at the auction they find that Yardley high-tailed it out of town first thing that morning.  Alyse is devastated and tries to stop the auction but her husband has his eye on another woman so she’s out of luck.  When this man, Marcus, buys her she’s not sure what will happen but she figures she’ll take him up on his offer of a living as a housekeeper, save money and then become an independent woman.

As Alyse and Marcus travel they talk and find out more about each other, although Alyse doesn’t know he’s a duke.  Despite Marcus’s determination to stay away from Alyse he finds that he can’t manage it.  He’s desperately attracted to her.  Of course this causes him to be hot and cold with her and that’s frustrating for both of them.

This was a good story.  I liked so much of it and the whole premise grabbed me and wouldn’t let go.  I had no idea when I started reading that wife selling was actually a thing back in the late 17th century and continued on until the 19th century.  I understand only the extremely wealthy could get an actual divorce, but I had no idea this was a way of going about getting rid of your wife.  Yikes.  From what I read this was actually a mutual agreement between husband and wife, and the wife had a final say in who purchased her (it was also illegal).  In this book, she didn’t have a choice so therein lies our story.

Marcus was a bit of an ass at times but I liked him anyway.  Alyse was pretty fierce for being sold like chattel but she held her own and I liked her inner strength.  There was a time when a clan interfered in the story and I thought that Alyse acted ridiculously but there you have it.

I thought the story had some occasions where it dragged but overall I enjoyed the story and recommend it.

4 responses to “Guest Review: The Duke Buys a Bride by Sophie Jordan”