For a full summary of #cockygate, check out our post here —–> Romance Author Trademarks Word, Starts #Cockygate: A Summary

The TL;DR version: Author Faleena Hopkins claimed her readers were buying books by other authors because they had similar titles/series names, so she trademarked the word “Cocky”, both as a word mark and in stylized form, then started sending C&D’s to authors with Cocky in their titles and/or series. When the romance community because understandably upset about this, she doubled down and started claiming she was being cyber-bullied. Retired attorney turned SciFi author Kevin Kneupper filed a petition to cancel the mark, which is pending.

So what’s new since our last update? Oh, nothing much. Just Faleena Hopkins went ahead and filed a lawsuit against Author Tara Crescent, Publicist Jennifer Watson and Kevin Kneupper.

On May 25, 2018, Kevin Kneupper Tweeted the legal threat he received from Hopkins’ attorney:

Thread for the new #cockygate legal docs. First up is Plaintiff's Memorandum of Law in support of request for a preliminary injunction and restraining order. A hearing on this is set for next Friday.https://t.co/8iUhRwMYTb

Hopkins filed against Kneupper to get his Petition to Cancel her trademark blocked. 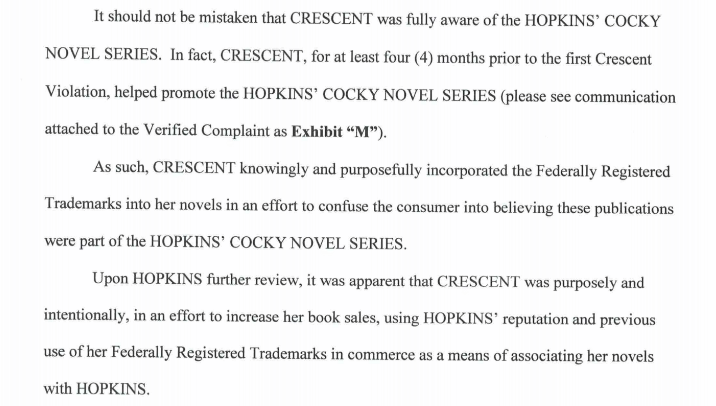 Upon HOPKINS further review, it was apparent that CRESCENT was purposely and intentionally, in an effort to increase her book sales, using HOPKINS’ reputation and previous use of her Federally Registered Trademarks in commerce as a means of association her novels with HOPKINS.

Hopkins filed against Watson because she has “participated and organized the publication and distribution of Cocktales”. 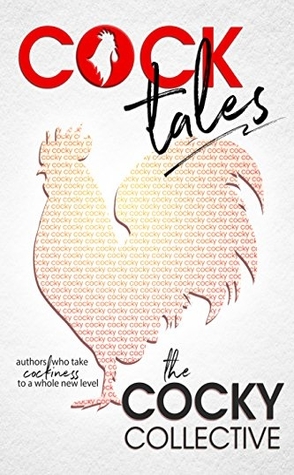 About the Cocktales Anthology:

‘Cocktales’ is a limited-release anthology (available *only* from May 26 – August 26, 2018) of original, never before published material, some of which is raw and unedited. Each story was specifically written for this anthology.

The goal of the Cocktales Anthology is to raise funds to fight against obstruction of creative expression. Specifically, what we believe are obstruction attempts through the trademarking of common (single) words for titular use in books / or as a book series (eBooks, print, and audio).

*ALL* net profits will be donated to:

1) Authors already impacted by creative-obstruction (10%), and
2) Romance Writers of America (RWA) (90%) as a general donation intended for their Advocacy Fund.

PLAINTIFFS request that this court order the Defendants CRESCENT and WATSON, to be enjoined and restrained from publishing, promoting, selling, distributing any works which infringe upon the PLAINTIFFS’ trademarks, including but not limited to the “Cocktales, The Cockiest Anthology” (hereinafter “Cocktales”), or any publications which include the Federally Registered Trademarks, or any similar variations thereof meant to confuse the public.

Here are links to the documents Kevin Kneupper posted:

You may be interested to note that at 23-24, Faleena Hopkins describes romance novel readers as "unsophisticated consumers" and states that they "do not exercise a high degree of care."

Instead they buy on impulse due to "bare-chested muscular males" on the covers.

Order to Show Cause
Complaint (includes all Exhibits from Plaintiff’s Memorandum.
Affidavit of Support

Let me just re-link that Tweet from earlier here:https://t.co/kvRymxARoe

As further set forth in HOPKINS’ Affidavit, various social media campaigns have resulted in a significant decline in her novel sales, as well as corresponding loss of income, significant and permanent damage to her reputation, as well as emotional distress.

…yet she claims in this video (see the full hour and forty-two plus minute video here) her sales have not been impacted.

A couple things I took note of:

1) As Kneupper notes in his tweet above, part of her argument is Romance Novel Readers are basically idiots. 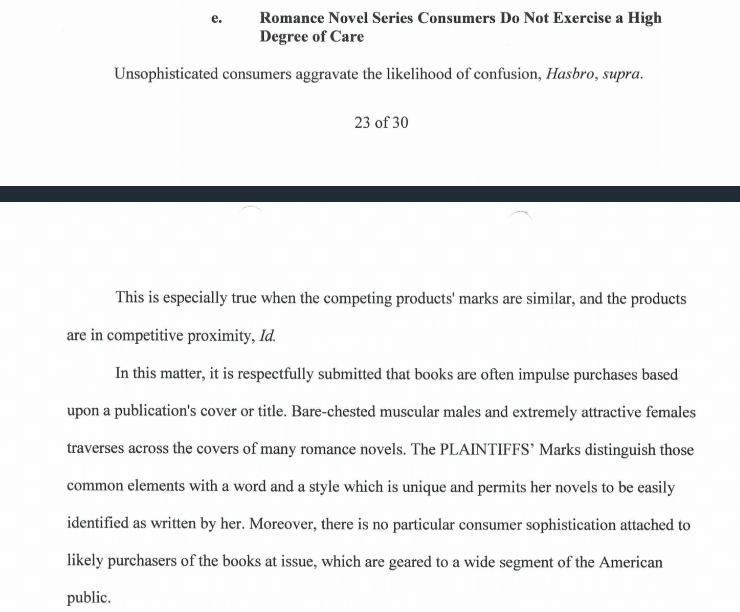 This is especially true when the competing products’ marks are similar, and the products are in competitive proximity, ID.

In this matter, it is respectfully submitted that books are often impulse purchases based upon a publication’s cover or title. Bare-chested muscular males and extremely attractive females traverses across the covers of many romance novels. The PLAINTIFFS’ Marks distinguish those common elements with a word and a style which is unique and permits her novels to be identified as written by her. Moreover, there is no particular consumer sophistication attached to likely purchasers of the books at issue, which are geared to a wide segment of the American public.

I can’t say for sure how Hopkins and/or her attorney meant for this to be taken, but it reads to me like they think all romance readers are ignorant hicks who can’t read or purchase novels based on anything but bare-chested covers.

2) Hopkins claims to be a well-known and best-selling author, but no one has heard of her.

Hopkins is a well-known and best-selling author of a series of romance novels, who self-publishes her work for sale to the public across the United States and the world, via internet sales through sites like Amazon.com.
Hopkins has, over the course of many years, established a significant reputation in the genre of romance.

Considering I, nor anyone else in my sphere of the romance community, has never heard of her, I find this to be a somewhat erroneous statement. I’m not saying I know every single author who writes romance novels, but as a well-established review site that has been operating for over ten years in this community, with numerous contacts in the Indie and Traditional Pub worlds, I find it hard to believe she was “well-known”, prior to this disaster, when I’ve never heard her name, nor has any of my contacts.

TL;DR – If you put a book in a "smaller" category, your rank bounces higher while having to sell fewer books. So you're a big fish in a tiny pond, in essence, but still a "bestseller." #cockygate

I can’t believe Faleena Hopkins isn’t worried about @amazon finding out she was a book stuffer on the KU program. I hope they check to see if she used click farms & paid reviewers to get her to that top spot. It’s a violation. Hopefully it is discussed in her lawsuit. #cockygate

So basically she said her books were short, listed them in a smaller category, then included a bunch of “bonus” content which means she ultimately made more money and “sold” more books. She cheated the system, which is against Amazon’s policy. Which could explain how she’s “well-known” and a “best-seller” when none of us have heard of her.

#ByeFaleena continues to burn those bridges, don’t you think? How can any reader or fan of hers continue to support her when it’s laid out in public records just what she thinks of readers of romance and readers of her books in particular. We’re known to be a lot of things but unsophisticated consumers aka dumb clods? That’s a new one.

See below for more information about Cocktales.