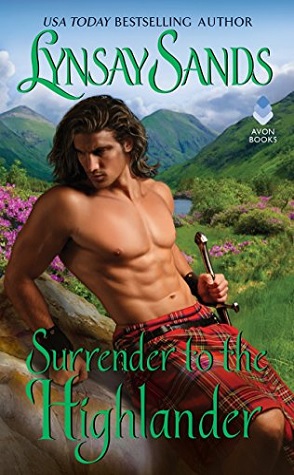 Edith Drummond owes her life to Niels Buchanan and his brothers. Waking after an illness to a castle overrun by rugged Highlanders is disconcerting, but so is learning that she’s slowly being poisoned. Niels insists on staying by her side, and Edith soon discovers that even more dangerous is her wild attraction to the fierce warrior.

Niels has never met a more courageous—or enticing—woman than Lady Edith. The idea of such a bonny lass being forced to enter a nunnery is more than any red-blooded Scotsman could bear. He’ll gladly marry her himself. But while sweeping her off her feet is easy, it’ll take all his skill to defeat her family’s relentless enemies, and convince her to surrender to his sweet embrace.

Neils Buchanan and his brothers are sent to check on Edith Drummond.  Their sister Saidh had sent several messages to her good friend Edith and hasn’t received word in return, which is not like Edith.  When the brothers arrive, they have a tough time gaining entry into the estate but when they hear that Edith is on her deathbed they manage to get in.  It appears that Edith’s father and two brothers have already died and Edith has been sick for weeks, just hanging on by a thread.  Rory Buchanan, a healer, diagnoses poison and treats accordingly. Soon Edith takes a turn for the better.

The brothers and Edith come to realize that her family has been targeted and they set about trying to figure out who the murderer is, which isn’t easy.  While they investigate, Neils protects Edith.  She believes her brother Brody, who is now Laird, and his wife will send her to a nunnery as soon as he gets back (he thought the castle had a catching illness so he left to avoid it) but after almost acting on their lust for each other, Neils asks Edith to marry him.  They liked each other but never thought they’d fall in love, especially when their fighting for Edith’s life.

This was another great book in the Highlanders series by Sands.  I’ve really enjoyed all of the books so far and this was no different.  I loved both Edith and Neils and thought they were perfect together.

Edith was an amazing woman.  She had been through hell with the deaths in her family and had almost died herself but in the end was looking out for everyone else, not herself.  She was kind, giving, thoughtful, smart.  I just loved her!  Neils was a good man as well and I loved how up front he was with Edith when he proposed.  He told her what he admired about her but admitted he didn’t love her.  That sounds harsh but I was happy to hear that he didn’t try to trick her in any way.  He was just as thoughtful as Edith and I loved watching these two fall in love.

The mystery part of the series was a good one.  I didn’t figure out “who-dun-it” until right before the characters started figuring things out.  Sands did a great job of making us think it was others and I loved that.

Overall a great book and I’m looking forward to reading the next in the series, which will be Neils’ brother Auley’s book.