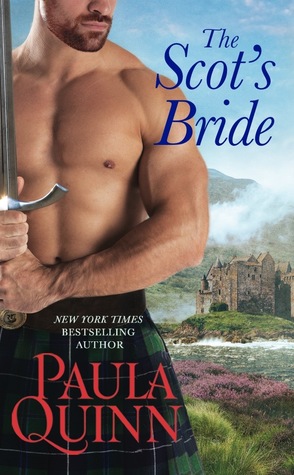 Highlander Patrick MacGregor likes his life just the way it is. Fighting for his coin, enjoying a woman's charms, and bearing no responsibility at all. Aye, that's the life for him. That is, until Patrick sees her-a raven-haired beauty with eyes as dark as midnight. Patrick swore never to fall in love. Not even with a lass as wild as he...especially when she's from a rival clan.

Charlotte Cunningham knows Patrick is trouble the moment she sets eyes on him. Her only goal is to escape the possibility of marriage. Any marriage. But as the summer days turn into sultry nights, enticing her beyond reason, Charlie is forced to choose between the freedom she craves and the reckless rogue she can't forget.

Patrick MacGregor is a man who’s a bit bored with life.  He sees beautiful, available women and can’t seem to find interest in them.  He thinks there might be something wrong with him. Lol  He sees Charlotte, however, and his interest is piqued.  He follows her and ends up being captured by her father and brothers while on their land.  Charlotte secretly warns Patrick to say that he’s not a Ferguson as her family has a feud with them.  Patrick isn’t a Ferguson but he’s related to them through his mother.  He decides to make himself a Campbell as the MacGregor name is proscribed and being a Campbell, the Cunningham’s welcome him in.  Especially as Charlotte’s father sees a marriage between Charlotte and a Campbell a very good thing.

Patrick is more and more enamored with Charlotte aka Charlie every day.  The more he gets to know her the more besotted he becomes.  Unfortunately when he finds out that her brothers killed his cousin he wants nothing more than revenge.  He has to play his cards right, however, and find out exactly what happened to his cousin Kendrick.

Charlie is a woman on a mission.  She wants out of her father’s house, away from his rule and her brother’s high-handedness.  She‘s trying to find a cure/relief  for her sister’s asthma and as soon as she does she’ll leave town.  She had been in love with her neighbor, Kendrick Ferguson, but her father had ordered her brothers to kill him when he was 15-years-old  just to keep him away from Charlie – she had never forgiven any of them.  She still loves Kendrick and had never looked at another man until Patrick showed up.

Charlie knows that Patrick can change her whole life and she’s not sure she wants that.  As much as Charlie tries to stay away from Patrick his love for her soon has her thinking of a very different future for herself.

This was a good Scottish romance.  I liked Patrick and Charlie a great deal and the story was definitely one that kept my interest throughout.

Patrick fell hard and fast for Charlie which was nice (even though he kept denying it to himself).  Charlie took a bit longer to admit her feelings for Patrick since she’d loved no one but Kendrick for so long.  Of course when true decisions needed to be made I was a bit surprised that Charlie chose Patrick.  Quinn almost did too good of a job telling us of Charlie’s love for Kendrick and it made me doubt her fast-growing feelings for Patrick.

The story had a few plot holes in it but overall it was a decent read.  It wasn’t overly exciting but sometimes that’s a good thing.