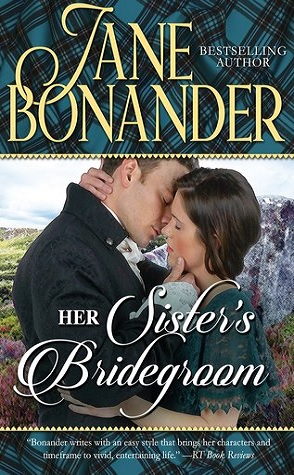 When Robbie Fleming is evicted from her Edinburgh rooming house, she fears she’ll have to live on the street. Penniless, orphaned, and on poor terms with her only relative―her fraternal twin sister, Birdie―Robbie has nobody to turn to.

But then she receives a letter from Gavin Eliot, the man she has pined for since she was a girl. Although Gavin (and every other male within miles) seemed head over heels in love with flirty and vivacious Birdie, his letter holds a surprise: He wants to marry Robbie. Thrilled by the proposal and her change of luck, Robbie accepts, landing on his doorstep with little more than the clothes on her back.

Bookish Gavin always has his head in the clouds. When Robbie shows up at his borderlands manor, he’s astonished―he realizes he’s unwittingly proposed to the wrong sister. But with Robbie in need of a home and Gavin in need of a wife, they come to an understanding. Will Robbie’s heart heal from the betrayal? And will Gavin learn to love the last woman he ever expected?

Robbie Fleming is living in a hovel, and about to be evicted, in Edinburgh when she gets a note from the boy she’s been in love with for 10 years. He asks her to marry him and sends money for the coach to get her to him.  When she shows up she’s so very happy and thrilled that Gavin has finally asked her to marry him.  She had always believed that he was in love with her fraternal twin sister, Birdie.

Unfortunately when unintentionally eavesdropping one night soon after her arrival she hears Gavin tell his friend that he wrote the note to the wrong sister.  He intended to write the note to Birdie but thought that her name was Robena (as in the bird: robin…birdie, get it?) But Birdie is a pet name for Roberta, her sister.  Robbie plans to leave but Gavin decides, after he hears that Birdie is married, that he will marry Robbie and make things work.

After they marry things are going along, not great but they’re going, when Birdie shows up.  Robbie believes that this could be the end of her marriage but Gavin surprises her in a big way. Unfortunately Birdie and her scheming ways haven’t lessened since she was young and she ends up pulling the biggest scheme ever – which might hurt Robbie the most.

A sweet story that I enjoyed reading.  My heart went out to poor Robbie.  She was always overshadowed by her sister and was so happy that she had finally gotten the attention of the man she loved.  She was devastated when she found out that he wanted Birdie instead but I thought she held up well.

The story revolves more around Gavin coming to terms with marrying Robbie and then dealing with Birdie’s scheme that hurts his wife.  I honestly wanted more romance in this book.  Yes, I thought that Robbie and Gavin fell in love but I still wanted the romantic aspect of that to be…more.

Birdie was a conniver and I didn’t like her at all, nor Gavin’s friend from the village who wanted him for herself.  He was a nice guy and apparently couldn’t see evil when it was right in front of his face.  He did redeem himself in the end of the book so that was good.

Overall it was a decent story but again, I needed more romance.