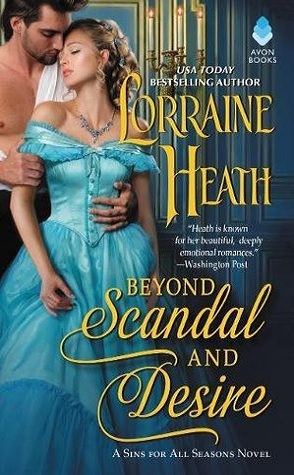 Mick, the bastard son of a duke, has made a name for himself.  He’s gone from living in complete poverty to owning large amounts of land in London and has become a successful businessman.  Now that he’s financially set he’s asked his father to acknowledge his birth.  The duke has ignored him. This, of course, pissed Mick off and he’s decided to take matters into his own hands.  He plans on ruining his half-brother, the heir-apparent to the dukedom.  Once he has the heir, Kip, on the brink of ruin he’ll get the duke to acknowledge him in order to save his son.

Aslyn’s parents died and she grew up as the Duke of Hedley’s ward. It had always been assumed that Aslyn and Kip, Hedley’s son, would marry, though Kip hadn’t asked her yet.  Aslyn wants more adventure in her life but she’s been kept sheltered for much of it.  The duchess rarely left the house and was afraid to let Aslyn leave.  When she meets Mick Trewlove she’s fascinated by him and wants to spend more time with him.

Mick plans on using Aslyn to further his plans as well.  He plans on seducing her but once he get to know her he realizes that he doesn’t want to use her for his plan.  He wants her for himself – forever.

This book was…awesome!  I loved almost every moment of the story and Heath’s writing just didn’t let down.  She kept me engaged and I found myself turning pages faster and faster.

Once Mick falls for Aslyn he knows that they can never be together.  He’s illegitimate and she’s sheltered.  He’s in trade and she’s the daughter of an Earl.  He also knows that once she finds out about his plans she’ll drop him like a hot potato.  He’s not stupid but he did make changes in his plans eventually and I loved that about him.  He realized that nothing was more important than Aslyn’s feelings about him and changed everything.  It was a pretty poignant moment in the book.

I didn’t particularly care for Kip, although he play a pretty big role in the story.  He acted the gentleman for the most part but he was SO addicted to gambling and drinking it was ridiculous.  He was a bit of an ass to Aslyn at times and I didn’t like that at all.

I loved Mick’s brothers and sisters!  I love how they interacted with one another and the genuine love they had for each other – as well as their mother.  Most weren’t blood related but you would never know that from how they acted – I loved it.

The story had a huge twist at the end that I didn’t see coming at all and I loved that it caught me by surprise.  That doesn’t happen very often so I was pleasantly surprised.  I can’t wait to see what Heath will bring us next in this series.

In the end this was a fabulous book and I highly recommend it.