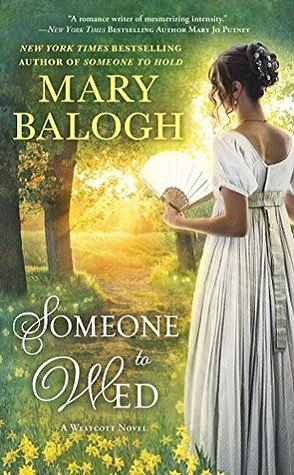 Reviewer: Tracy
Someone to Wed by Mary Balogh
Series: Westcott series #3
Also in this series: Someone to Love, Someone to Hold, Someone to Care, Someone to Honor, Someone to Trust
Publisher: Berkley
Publication Date: November 7th 2017
Genres: Historical Romance
Pages: 400
Add It: Goodreads
Amazon | Barnes & Noble | The Ripped Bodice | Google Play Books

When Alexander Westcott becomes the new Earl of Riverdale, he inherits a title he never wanted and a failing country estate he can't afford. But he fully intends to do everything in his power to undo years of neglect and give the people who depend on him a better life . . .

A recluse for more than twenty years, Wren Heyden wants one thing out of life: marriage. With her vast fortune, she sets her sights on buying a husband. But when she makes the desperate-and oh-so-dashing-earl a startlingly unexpected proposal, Alex will only agree to a proper courtship, hoping for at least friendship and respect to develop between them. He is totally unprepared for the desire that overwhelms him when Wren finally lifts the veils that hide the secrets of her past . . .

Alexander Wescott arrives at Withington House for tea expecting that he would be meeting some of his new neighbors.  He’s surprised when it’s only the lady of the house, Miss Wren Heyden, and her maid.  He’s a bit put off by the situation and by Miss Heyden, and just wants to leave.  He is shocked when she proposes marriage to him out of the blue.  She had been sitting in shadow and when she reveals herself he sees a large purple mark on one side of her face that she had had since birth.  Alexander agrees to get to know Wren and they start a bit of a courtship that ends with Wren retracting her proposal.

Almost a month later Wren arrives in London.  When Alexander sees her again he knows that marrying her is the right thing to do.  He proposes, and she accepts.  Unfortunately Wren thought that once they were married that she would continue to live in obscurity – she couldn’t have been more wrong.  The reclusive Wren soon finds herself surrounded by Alexander’s accepting family and eventually going out in public without her veil.  The ghosts of her past, however, soon start to tear her apart from the inside and she’s not sure that marrying Alexander was the wisest thing to do as she considers herself a broken woman.

This was such a sweet book.  I have enjoyed the Wescott series so far and this is another good one.  I expected, after book 1, that the books would be strictly about the Wescott children who had found themselves illegitimate after thinking for most of their lives that they were legitimate.  I was wrong and I’m happy about that. 🙂  I didn’t realize that I wanted Alexander’s story until I started reading.  It was so very good and I was happy that Balogh went the direction she did.

Alexander was such a great character and a good man.  He was conscientious and thoughtful and genuinely cared about people.  When he inherited the Earldom he was shocked and overwhelmed.  He had inherited a home that had been completely neglected despite the former earl’s wealth.  Unfortunately that wealth hadn’t come with the title so Alexander was trying to do the best he could.  He knew he needed a rich wife but it was distasteful to him to marry for money – I can’t say I blame him.  Wren presented a perfect solution but he knew that she had many issues and the wall she put up between herself and people would cause problems.  He told himself when she broke things off that he was relieved, but he couldn’t decide if he was being honest with himself.  I was so happy that he made the decisions he did later in the book. He proved that he was the honorable man I thought him to be.  He took such good care with Wren and her sensitivities to people and I loved him for that.

Wren started off not being my favorite.  She was standoffish and caustic and it bothered me as I knew Alexander didn’t deserve it.  She tried to come out of her shell but after being a recluse for twenty years it was difficult, to say the least.  When she finally made it to London she seemed to become a different person and one I greatly admired. She could have so easily stayed in her rooms and continued to be the recluse but she made an effort to show herself despite her self-consciousness and I loved it.  Balogh did a wonderful job writing this heroine!  She had been through so much in her life that she could have folded up into herself and crumbled but she didn’t and loved her for it.

Balogh has become one of my go-to authors when it comes to historical romance.  She always provides a lovely story and wonderful romance and this was another great one.  The Wescotts are a lively family and I can’t wait to read more about them in the future.

6 responses to “Guest Review: Someone to Wed by Mary Balogh”