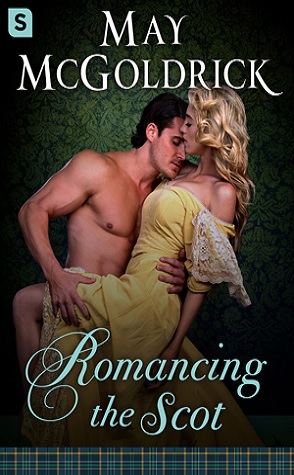 Hugh Pennington—Viscount Greysteil, Lord Justice of the Scottish Courts, hero of the Napoleonic wars—is a grieving widower with a death wish. When he receives an expected crate from the continent, he is shocked to find a nearly dead woman inside. Her identity is unknown, and the handful of American coins and the precious diamond sown into her dress only deepen the mystery.

Grace Ware is an enemy to the English crown. Her father, an Irish military commander of Napoleon’s defeated army. Her mother, an exiled Scottish Jacobite. When Grace took shelter in a warehouse, running from her father’s murderers through the harbor alleyways of Antwerp, she never anticipated bad luck to deposit her at the home of an aristocrat in the Scottish Borders. Baronsford is the last place she could expect to find safety, and Grace feigns a loss of memory to buy herself time while she recovers.

Hugh is taken by her beauty, passion, and courage to challenge his beliefs and open his mind. Grace finds in him a wounded man of honor, proud but compassionate. When their duel of wits quickly turns to passion and romance, Grace’s fears begin to dissolve…until danger follows her to the very doors of Baronsford. For, unknown to either of them, Grace has in her possession a secret that will wreak havoc within the British government. Friend and foe are indistinguishable as lethal forces converge to tear the two lovers apart or destroy them both.

Grace and her father are in Antwerp having just gotten off of a ship from the colonies.  When their baggage carriage turns up at their inn without their trunks Grace goes down to see what happened.  When she returns to her room she finds her father dead and people searching her room. She runs and street urchins help to hide her.  After a long run they manage to hide her in a crate with a plan to come back to get her.  Unfortunately the crate is then nailed shut and put on a ship to Scotland. No amount of yelling attracts anyone’s attention.  Grace doesn’t see the light of day for another five days.

Hugh Pennington has taken up ballooning and is anxious to open his new gondola.  When he opens it he is shocked to find a woman who is almost dead inside.  He and his sister take her to their home and nurse her back to health.  Despite being half dead Hugh can’t deny that he’s intrigued by how this woman came to be in his gondola.

When Grace awakens she doesn’t know where she is or who has been taking care of her.  The people seem nice but she’s the daughter of an Irish man who was a colonel in Napoleon’s army – he fought against her hosts!  She pretends to have amnesia and tries to figure out how to leave.  She spends time with Hugh and his sister Jo and the more time Grace and Hugh spend together the more she comes to care for him.  She knows that nothing can come of it, however, as she can never tell him who she is.

I have to say that the more that I read May McGoldrick’s book, the more I like this author.  The premise of this book is very different from what I’ve read in the past.  With Grace being the daughter of someone who fought for the French in the French wars.  It was pretty interesting and I have to say that I found it enthralling.  Throw in the almost-dying-by-being-locked-in-a-crate scenario and this book had my whole attention.

Hugh and Grace’s romance was sweet.  While it seemed to happen pretty quickly there was definitely a bit of time in between Grace waking up and the end of the book, McGoldrick just didn’t show us every minute of it.  I appreciated that as I could still feel the time moving and didn’t feel like the romance was rushed in any way.

Jo, Hugh’s sister, was a lovely woman.  She was a spinster and was supposedly happy with that but I could tell she wanted a family of her own.  I certainly hope that she gets her own book.

I definitely recommend reading this book as it was a good one.  Then be sure to read about Hugh’s brother, Gregory, in the Christmas in Kilts anthology – that was a good one too.

One response to “Guest Review: Romancing the Scot by May McGoldrick”