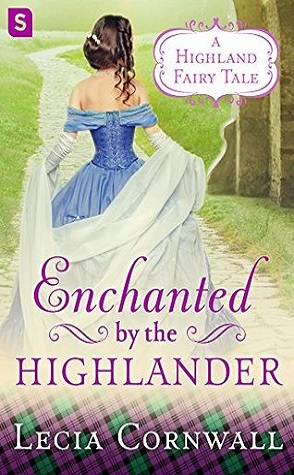 Gillian MacLeod is shy and quiet, the least likely of all her sisters to seek out excitement and adventure. But on a moonlit night at a masquerade ball, Gillian steals a kiss from a mysterious stranger, knowing she’ll never see him again.

John Erly, disowned by his noble English father, started a new life in Scotland. Most people are suspicious of the foreign mercenary and he does everything is his power to avoid romantic entanglements. But he can’t forget the bewitching beauty who kissed him in the dark, and stole his heart, even though he has no idea who she might be.

A year later, John is given the duty of escorting Gillian to her wedding and immediately recognizes her as the temptress he’s dreamed of for months. There’s not much he can do when she's promised to another man, but fate intervenes and this time, passion—and adventure—can’t be denied. Honor demands he stay away from the MacLeod’s enchanting daughter, but love has a very different ending in mind...

Gillian is fascinated by John Erly, an Englishman and the Captain of her brother-in-law’s army.  Gillian has always been quiet and shy and because of this she has let her family think and speak for her for her whole life.  When Gillian has the opportunity at a masquerade ball to be an unknown she takes the opportunity to seek out John.  He soon is enchanted and takes her into the garden.  They kiss and it’s amazing!  When people start entering the garden Gillian is afraid it will be her family and takes off, leaving only her mask behind.

Gillian leaves with her father the next day and doesn’t return for almost a year.  Though she has never forgotten the amazing kiss with John but she returns now so that her brother-in-law can take her to Edinburgh to get married.  She knows she can never marry John (because he’s English and her father would never allow it) so she has accepted the marriage proposal from a man who’s older than her father.

John has never forgotten the kiss he shared with the mystery woman and it’s haunted him for the many months since.  When he sees Gillian again he figures out she was the one he kissed.  He vows to stay away from her as he knows she’s betrothed.  When circumstances change and John is asked to take Gillian to Edinburgh to be married he can do nothing but agree.  Events cause the two to be together by themselves and they finally admit to themselves they’re in love.  Of course with Gillian getting married John isn’t about to stand in the way of her future but…things have a funny way of working out for the best – it’s a fairy tale after all!

This was another great fairy tale inspired romance in the Highland Fairy Tale series.  This one was loosely (and I do mean loosely) inspired by Cinderella.  Gillian drops her mask after she kisses John and gets back to her room at midnight.  That about covers the similarities.  Despite that it was a great story.

Gillian, as I said before, had let everyone think and talk for her all her life.  I have no idea why as she was smart and funny.  Yes, shy, but her family just drove right over her time and again – even when she did want to talk.  I was happy that when it came down to what she truly wanted (John) she opened her mouth and stood up for herself and their relationship.

John was a good man who had had a rough life but had settled into his duties as Captain in Scotland.  It wasn’t what he had planned for his life, but he did his job well.  He never expected to fall in love with a highland lass but when he did he tried to do the honorable thing. I had to admire the guy and his scruples.  I was also happy when he finally put his and Gillian’s happiness first – that was pretty great.

If you haven’t read this series, and you like fairy tales, then you should definitely pick up one of these great books.

2 responses to “Guest Review: Enchanted by the Highlander by Lecia Cornwall”