I discovered D.B. Reynolds a few months ago and have been devouring her books ever since. The first book I read by D.B. was The Stone Warriors: Damian. I’ve also read her Vampires in America series. One of the parts I liked best about The Stone Warriors: Damian was Damian’s relationship with Nico. They are truly brothers and their bond just pours off the pages. The time that Damian and his fellow warriors have spent in stone is about to come to an end and I can’t wait to see where this series heads to next. 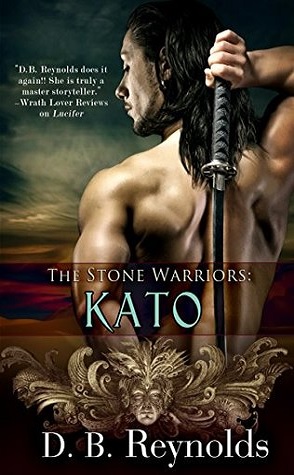 It was a time when gods walked the earth, when armies fought not for bits of land, but for the very existence of humanity. On such a battlefield, five formidable warriors stood against an evil greater than any the earth had ever seen. But evil is not an honorable foe. Betrayed by someone they trusted, the warriors were cursed, one by one, tossed into the maelstrom of time, imprisoned in stone, their freedom resting on nearly impossible conditions. Until…

Kato Amadi…born of darkest sorcery, unstoppable on the battlefield, his magic is as deadly as his blade. But not even magic could save him from vicious betrayal. Trapped for millennia in darkness and silence, he is freed at last, only to find himself in the middle of a battle against the very beasts of hell he was created to destroy.

Grace Van Allen is a scholar of ancient languages who toils in the dim recesses of a museum basement with only a beautiful stone warrior to keep her company. But when Grace calls upon her silent warrior to help her translate an obscure new language, she breaks the ancient curse holding him prisoner…and frees three deadly demons to rampage through her city.

Tracking demons is what Kato was born to do, but he’ll need Grace’s help. And when they discover that Kato’s enemy is still alive and still plotting against him, their hunt takes a dangerous turn, one that might just prove fatal for both of them…

The curse buzzed angrily, a searing heat against his skin. The damn thing didn’t want to release him, but it was bound by the words Sotiris had spoken so long ago. Words designed to keep him locked away forever. But words change their meaning with the passage of time, and the Fates will always play their games.

Long-unused muscle and sinew flexed and burned, as his heart pumped fresh blood to storm through arteries and veins, pulsing thick and strong. It was a welcome agony, but an agony nonetheless. His gaze was drawn to a distraction, the woman. She was lovely. Tall and lithe, with flowing blond hair and eyes that were so pale a blue, they appeared silver if the light struck just right. Her skin was as smooth as that of the wealthy women of his time, the ones who’d been happy to climb into his bed, but had spurned him by the light of day. He was the dumb one, all muscle and no brain. At least that’s what everyone had thought of him.

Or not everyone. There’d been his brothers, fellow warriors who’d fought and laughed by his side. And their leader, Nicodemus. He’d been the one who brought the four of them together, made them a force like the world had never seen. No one had stood before them.

But their very skill and courage had been their downfall, because men always want what they can’t have, the very things that Nico and his warriors had stood to protect. And those same weak and greedy men have ever been drawn to evil leaders who promise the world but deliver only pain.
Grace threw her pencil down with a frustrated noise, drawing Kato’s attention once more. He focused abruptly on what she’d been writing, and fear drove his heart to work harder, to flood his muscles with blood, his nerves with energy. He needed to stop her. She could not be permitted to finish that scroll. To activate the curse it contained would be . . .

His prison split open with a thundering crack that numbed his ears. But he didn’t need his ears. Not for this. His hand clenched on his sword, his fingers stroking the grip like the first touch of a lover, remembering every rough inch of the leather wrap. He staggered as the last bit of stone fell to dust, but his warrior’s body responded instinctively, balancing with ease, his gaze never wavering from the target.

He strode down the long length of the dark room, blade raised high. Grace was on her feet, pale eyes wide with fear, her mouth open in a silent scream of shock, a scream that found its voice as the tip of his black blade came down and pierced the scroll she’d been copying . . . a fraction of a second too late.

YES. Doesn’t it sound amazing? You really need to read this series if you are a paranormal person. And even if you’re not. 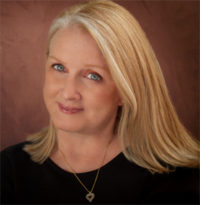 D. B. Reynolds is the RT and EPIC Award-Winning author of the popular Vampires in America series of Paranormal Romance/Urban Fantasy, and an Emmy-nominated television sound editor. She holds graduate degrees in international relations and history from UCLA, and was headed for a career in academia when, in a moment of clarity, she left behind the politics of the hallowed halls for the better paying politics of Hollywood. In addition to her two Emmy nominations, D.B. was awarded an MPSE (Motion Picture Sound Editors) Golden Reel and multiple MPSE nominations for her work in television sound.

She lives in a flammable canyon near Los Angeles, and when she’s not writing her own books, she can usually be found reading someone else’s. Visit her blog at www.dbreynolds.com for details on all her books, for free stories and more.