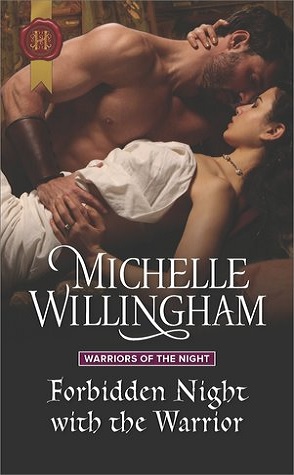 One wicked night for an heir!

Rosamund de Courcy has always loved Warrick de Laurent, but was forced to marry another. Now her husband's dying command is that she must provide him with an heir. To do so, she will have to spend one sinful night...with Warrick!

The powerful warrior was wounded by Rosamund's abandonment years ago, and Warrick refuses to let her touch his heart again. But this illicit night is impossible to resist, and soon he is determined--he will not only possess her, but reclaim her for his own!

Three years ago Rosamund met and fell in love with Warrick.  She wanted nothing more than to be with Warrick but her father had other ideas about her future – not one where she wed a third son with no property.  Under threat of death to Warrick, Rosamund marries.  Now it’s three years later and her husband, Alan, is dying.  He summons Warrick to him and tells him that he wants him to lie with his wife to produce an heir.  Alan doesn’t want his evil brother to inherit and he knows he can’t produce an heir.  Rosamund is adamant that this not happen but Alan gets his way.

Being with Warrick again brings back all of the old feelings she once had for him.  She knows she never stopped loving him but she is still married to her husband.  When he dies Rosamund fears for her life fro Alan’s brother, Owen, and fleas her home.  Unfortunately Owen is determined to have Alan’s estates as well as Rosamund.

I never am one to read books that involve infidelity but this was a different take on everything.  I still didn’t care for it but I could deal with it better because of the circumstances.  Alan truly gave Rosamund no choice in the matter and that pissed me off.  He even forced it on her by coming to her in the dark –   he wanted her to believe that it was he that she was having sex with.  Of course she knew immediately it was Warrick.  That whole scene had me cringing because Warrick – who I had really liked  up until that point was involved.  It was a bit weird to say the least.

The story revolves around not only the issues with Alan and his wishes for Rosamund before he dies, but the issues with his brother Owen as well.   Then there was Rosamund and Warrick working out their issues from the past as well as the problems they faced currently.  There was a lot going on but as usual Willingham wrote it in such a way that it flowed easily.  She took all the different parts of the story and brought it into one cohesive and very good book.  I really enjoyed all of the parts of the story and definitely recommend this one.