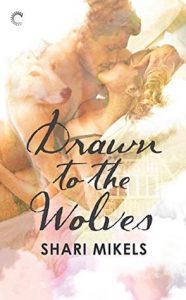 The pack's alpha has finally found his fated mate…and she's terrified of wolves.

Wolf shifter Callan Mohan has a powerful connection to his pack. As alpha, he can sense if something is wrong—and when he feels panic coming from an unknown source, his instincts tell him she's someone to be protected at all costs.

Rescuing a stranger from an unexpected confrontation with two wolf shifters is easy. Helping her move from fear to acceptance of the animals—and him—is a challenge.

Kate Ballard's attraction to her mysterious rescuer is instant. That she falls for Callan so quickly isn't surprising—his strong, confident presence puts her at ease, and the strange connection she has to him makes her feel safe almost immediately. He's the man she didn't know she was waiting for.

It's only a matter of time before Callan has to tell Kate the truth. And find out, once and for all, if her love for him is enough to overcome her fear.

Kate Ballard has worked for the Atlanta PD for the past 10 years.  She has empathic abilities and after 10 years of drawing human monsters she just couldn’t do it any longer.  She’s now taking a much needed rest and she’s in Whiskey Grove, Tennessee on the advice of her best friend.  She plans on relaxing and sketching wildlife to her hearts content.

The first afternoon she’s out sketching, however, she runs into trouble.  She was told to stay of a certain plot of land but after chasing an eagle she finds herself facing the barrel of a gun.  The man wants to shoot her and she’s terrified of the humongous wolves the man has at his sides.

Kate is rescued by Callan.  He calms the gun holder enough to get Kate out of there.  From the first moment that he sees Kate, and feels her in his head, he knows that she’s his mate.  The problem is that Kate has an unbelievable fear of wolves and telling her that he’s a shifter might just make her run from him instead of to him.

This was a sweet little novella.  I liked Kate and Callan both and though they were good for each other.  Their relationship started off pretty quickly but since he knew that she was his fated mate he didn’t waste any time.  Before you know it she’s practically living with him which was fast but again, fated mates.

I found myself entrenched in the book when Kate was being held at gunpoint and was excited to go from there.  Unfortunately I didn’t care for the way Kate handled her fear and the shifter issue.  The way the author wrote her I got the feeling that she would have handled it differently but she ran.  I was happy to read that that part of it wasn’t drawn out too long and Kate and Callan got their HEA.

If you’re looking for a quick, easy paranormal story to read this would be a good one.

One response to “Guest Review: Drawn to the Wolves by Shari Mikels”