I remember receiving Dragon Bound in the mail some months before it was published. I read it in a matter of hours, closed it, then immediately started it again. It’s been years since a book captured me as immediately and as intensely as this one. 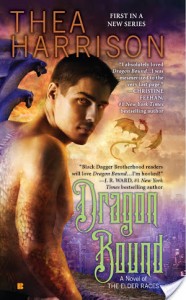 As the most feared and respected of the Wyrkind, Dragos Cuelebre cannot believe someone had the audacity to steal from him, much less succeed. And when he catches the thief, Dragos spares her life, claiming her as his own to further explore the desire they’ve ignited in each other.

Harrison’s world-building is top notch. I fell right into this world of the Elder Races. Dragos and Pia both were fabulous characters. Their banter and wit kept me entertained throughout the novel.

It begins when Pia steals a penny from Dragos’ hoard. For the first time in centuries Dragos is intrigued.

“All I took was a freaking penny. Besides, I already gave you another one.”

She stared at him. “Oh my God, it’s scary you noticed that.”

Pia can’t seem to keep her mouth shut when Dragos is around and she ends up saying the most ridiculous things.

He stared at her neck. Realization pulsed. He was looking at the bite he had given her. A hard length was growing against her hip. “So, is that your long, scaly, reptilian tail, or are you just happy to see me?” No, she did not just say that. Did she?

His reaction to her is totally unexpected. He wants to be angry and kill her, but he can’t help but be fascinated instead.

“Yes, I know,” he said, impatient. “I am going to rend you from limb to limb. Someday. When I feel like it. In the meantime, you will not faint, you will get warm, and you will stop being distressed.” His nostrils pinched. “I don’t like how it smells.”

Despite being as old as time (possibly literally) he has a fabulous sense of humor.

“That’s my long, scaly, reptillian tail. And it’s bigger than anyone else’s.”

His head jerked up. He had one of the most startling and unwelcome thoughts of the last century.

Am I a boyfriend?

He growled and jerked the door open.

“You might have noticed I’m a primitive kind of guy.” He showed his teeth and got into her face. “All those centuries of civilization? Just a veneer.”

Honestly, I could quote this entire book. That’s how good it is. I just love it.

She leaned forward and staggered, as she confided in a whisper, “You’re the sexiest guy I’ve ever seen too. You know, your long, scaly, reptilian tail really is bigger than anybody else’s. Not that I’ve been with very many guys. Or was comparison shopping or anything.” She hiccupped and watched him worriedly as he guffawed. “Have I just gone over a conversational cliff?” 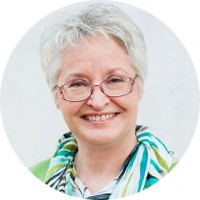