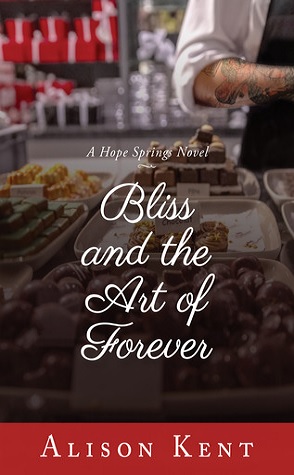 Now that she’s committed to leaving Hope Springs, she’s falling for the wrong man…but he just might give her all the right reasons to stay.

Two years after her husband’s death, kindergarten teacher Brooklyn Harvey is leaving Hope Springs for her in-laws’ vineyard in Italy—with no plans of coming back. That is, until she meets a disarmingly sexy biker-turned-chocolatier. He might be the man of her dreams, but he’s also the father of one of her students; as such, he’s strictly off-limits.

Callum Drake knows a good thing when he sees one, and he doesn’t want to let Brooklyn get away, even if his rival for her affection is the ghost of her dead husband. He’ll do whatever it takes to win her over, including making chocolates concocted just for her—chocolates that evoke memories of their time together. But can he create a second love bright enough to pull her, and her heart, out of living in the past?

On a random trip to the library I found Bliss and the Art of Forever by Alison Kent hanging out on the “newer” book section. Being one of those people who DOES judge a book by it’s cover, I had to pick it up! As I have mentioned in my previous reviews, I am a total sucker for books with “cute” covers. I use this term for lack of a better word, as these covers are the ones that draw my attention before any other. Then, on top of that, if the synopsis describes a quirky romance, a creepy psychological thriller, or an emotionally-charged drama, I am pretty much sold. That being said, this book fits the above criteria to a T.

Bliss and the Art of Forever is the 4th book of a series called Hope Springs. Seeing that, I looked around for any of the previous books but had no luck. After reading this book though, I feel like it can be read as a stand-alone. I didn’t feel like I missed anything by not reading the prior books. I did feel that this book was a little slower paced than the ones I normally read. I personally didn’t find this to be an issue, but thought it was worth mentioning for those readers who prefer a faster pace. I actually liked the more relaxed pace as it seemed perfect for this simple and sweet romance.

What is different about this book from other romances that I am familiar with is that one of the main characters is a long-haired, tattooed ex-biker. You usually find this type of Alpha Male in those steamy erotic reads. The thing that drew me in was that fact that the guy is also a single parent of a six yr old daughter, and is a successful chocolatier. The book includes some yummy-looking recipes thrown in every couple chapters as well. I actually found a few that I wrote down to try later! The only other thing that I could find that might deter some other romance readers besides the slower pace is the fact that the book does not include any steamy sex scenes. So, if that is something that matters to you, you might keep that in mind.

Bliss and the Art of Forever is a lighthearted, readable romance that provided me with a relaxing way to pass the time while I waited for my car to be serviced. I sped right through it without having to put too much thought into it. The setting of Hope Springs was perfect, and I found all the characters to be engaging and interesting. I will definitely be checking into the other books in the series.