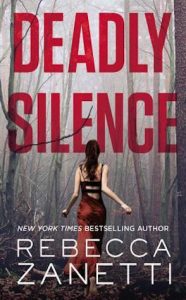 Under siege. That's how Ryker Jones feels. The Lost Bastards Investigative Agency he opened up with his blood brothers has lost a client in a brutal way. The past he can't outrun is resurfacing, threatening to drag him down in the undertow. And the beautiful woman he's been trying to keep at arm's length is in danger...and he'll destroy anything and anyone to keep her safe.

Paralegal Zara Remington is in over her head. She's making risky moves at work by day and indulging in an affair with a darkly dangerous PI by night. There's a lot Ryker isn't telling her and the more she uncovers, the less she wants to know. But when all hell breaks loose, Ryker may be the only one to save her. If his past doesn't catch up to them first...

Did you love Rebecca Zanetti’s Sin Brothers series as much as I did? If not, there’s nothing in this book that’s going to convert you. If you enjoyed the previous series too, though, this spin off is more of the same, which might be a good or bad thing depending on your perspective.

The Blood Brothers series focuses on yet another set of brothers, private investigators Ryker, Heath, and Denver. Once again, these brothers have unusually sharp abilities, and once again they are very manly and full of all the broody, brotherly feels. This is Ryker’s book, and he’s the oldest of these brothers of circumstance, not biology. He’s got a fuck buddy, Zara, who he visits whenever he’s in town. They’re both pretty clear about the no-strings part, but when Ryker sees a bruise on Zara’s face during a visit, he starts getting all protective and wanting to know what’s going on in her life. Ryker’s life too is getting complicated, with a frustrating serial killer that keeps eluding him and his brothers and a very strange kid wanting them to find someone from their past. Ryker and Zara can’t help but be drawn together as they try to untangle all the threads.

These books are definitely my particular crack. I usually am not a huge fan of the overbearing alphahole, at least for more than one book in a row, but Zanetti’s brand of alphahole works for me. Or, maybe it’s more accurate to say that the larger story lines grab my attention enough to lessen my usual frustrations with this type of hero. The plot is fast paced and has lots of twisty details (albeit with too many convoluted storylines happening simultaneously). Plus the relationship between the brothers is touching and adds humanity to their backgrounds. There’s no way around it though–Ryker is an arrogant jerk. He’s bossy and pushy to everyone, especially Zara, and several times he deserved a swift kick in the junk. Despite all that, what did redeem him a touch for me was that he does it all in an attempt to keep those he loves safe. As the oldest of the brothers, he was the protector from an early age and takes that responsibility seriously. He is so determined at the start to stay away from Zara because he just can’t handle the immense responsibility of one more person, but of course he can’t help himself and realizes he doesn’t want to live in a world where he doesn’t get to protect Zara.

I could at least understand where Ryker was coming from, but Zara was a little more confusing to me. I desperately wanted her to stand up to Ryker more, but she likes being bossed around. At first it’s a sex thing–she likes Ryker because he’ll take charge in bed and it makes for some hot scenes–but it quickly extends to other areas of life, too. They have a weird antagonistic relationship, and Zara will deliberately pick fights and piss Ryker off. She says things like “you can’t tell me what to do” but then she’ll let him tell her what to do. She really needed a bit more backbone and agency.

If this all sounds like something you’ve read in the Sin Brothers books…you’d be spot on. It certainly felt like same story we’ve already had. Domineering alpha afraid to get involved, heroine in need of protecting, strong brotherly love, secrets and mysteries from the past that have to be uncovered, etc. There’s even a lovable senior citizen, a secret bad-guy base, and the same villain from the other series! I liked all that in the other four books and I liked it here as well, but my enjoyment did dim just slightly as the book went on and it was feeling so familiar. I’m still hooked by the larger storyline and I will happily read the rest of the series, but I’m hoping for some new ground in later books. (Number one on my wish list? Another spin off series about 3 amazing sisters! That would rock my world.)

If you’re new to the Sin Brothers, I wouldn’t start with Deadly Silence or you’ll miss the larger world building. However, if you read the Sin Brothers books and want to revisit the world (and get a small glimpse of my absolute favorite brother Jory, sigh), I think Deadly Silence is a fun, if not exactly unique, addition to that universe.