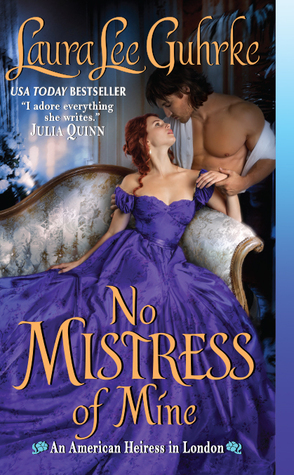 USA Today bestselling author Laura Lee Guhrke is back with the latest in her dazzling An American Heiress in London series, in which a reformed rogue finds all his honorable resolutions tested by the only woman who ever broke his heart...

After spending his youth as one of the wildest rakes in the ton, Lord Denys Somerton has devoted the past six years to putting his past behind him. He is determined to fulfill his duties, find a suitable wife, and start a family, but that plan changes when Lola Valentine—the red-haired temptress from his past—returns to London, sparking the same irresistible desires that almost ruined his life once before.

Lola is a woman with no romantic illusions. She knew love would never be enough for a British lord and an American girl from the wrong side of the tracks. For Denys’s sake, she walked away from him and the glittering life he offered. But when an unexpected inheritance brings her back to London, Lola discovers the passion between them is as hot as ever. Can they vanquish it, or will it burn out of control again and destroy them both?

No Mistress of Mine is the fourth installment in the American Heiress in London Series by Laura Lee Guhrke and IMO, it’s another fabulous addition to this series.

Lola is back in London on a mission. When she inherits half of a theater that is half owned by her ex-lovers family, she knows that it’s going to be tough going trying to get Denys to let her in on the business side of things since the previous owner didn’t really take a vested interest in the business. She’s determined not to be that kind of owner because she has goals and dreams that being part owner of a theater can make easier and she’s determined to make a go of it.

Denys cannot believe that Lola is back in London. He hasn’t seen her since she dumped him over for Henry, his business partner who had a better offer than he did. He offered her marriage. To take care of her but she didn’t want him. Instead, she chose to become Henry’s mistress over his wife. It’s been years and while Denys thought he was over being pissed off about it, turns out, he was wrong. He’s still thoroughly pissed off at Lola for her betrayal and abandonment. So when she shows up in London again after Henry’s death and he finds out that she’s taken over Henry’s half of the theater, he’s livid. He didn’t ask for this. He doesn’t want this. He wants to be the responsible gentleman that he’s become in the years since Lola left him and with every minute that he spends in her company, old feelings resurface and so do old secrets.

But like I always say (as does Selena Gomez)…

I will admit that in the beginning, I spent a little bit frustrated with how mad Denys was and how unreasonable he was being where Lola was concerned. I guess it’s been a while since the last book where all the drama went down (I forgot about all of that) and eventually, Denys comes around. I was glad that he didn’t take his sweet ol’ time getting to that place where he could be reasonable and see things from Lola’s side. I loved seeing the two of them try to find their new normal and I came to admire the hell out of Lola.

Lola was strong and she was everything that I want in a strong heroine. She’s smart and she’s strong but she’s not a bitch or to stupid to live. She had all of the right characteristics to make you empathize with her and love her.

Denys really came full circle for me because while he frustrated me in the beginning, I loved the hell out of him in the end. He made me swoon into a puddle of love for him when he stood up for Lola and when he just loved her. I’m grinning like a schoolgirl remembering him and his love for Lola. He couldn’t help himself.

Overall, this was a wonderfully written historical romance that had me wrapped up in feels. I enjoyed it quite a bit so I definitely recommend.

4 responses to “Review: No Mistress of Mine by Laura Lee Guhrke”