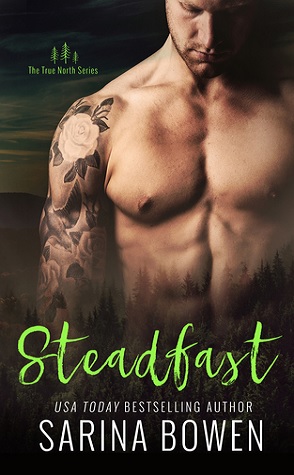 She’s the only one who ever loved him—and the only one he can never have.Jude lost everything one spring day when he crashed his car into an apple tree on the side of the road. A man is dead, and there's no way he can ever right that wrong. He’d steer clear of Colebury, Vermont forever if he could. But an ex-con in recovery for his drug addiction can’t find a job just anywhere.

Sophie Haines is stunned by his reappearance. After a three year absence, the man who killed her brother and broke her heart is suddenly everywhere she turns. It’s hard not to stare at how much he’s changed. The bad boy who used to love her didn’t have big biceps and sun-kissed hair. And he’d never volunteer in the church kitchen.

Steadfast is the second book in the True North series and it features Jude, a recovering addict who was addicted to prescription pills. When we first met Jude, he was a skinny guy who just got out of prison and was looking for a fresh start that nobody wanted to give him. He found his footing working for the Shipley’s in Bittersweet and when he picked his last apple at the farm, he made his way back home and is struggling to stay sober and get his life back.

It’s hard to stick to his guns when he doesn’t have a support system in Colebury. The place he called home until he was sent to prison for drug use, drug possession with the intent to sell and then vehicular manslaughter. The guy he killed when he was high as a kite? His ex-girlfriend’s brother. Being back in Colebury brings back a lot of memories. There isn’t a place he can go to escape the memories of him and Sophie. Sophie is the only girl he’s ever loved and the only person who has ever loved him. When he cut things off with her while he was in prison, he didn’t think that she’d want to have anything to do with him again but when they start seeing each other everywhere they go, she’s back in his life and Jude will take anything she will give.

It was easy to see why Jude loved Sophie so much. I enjoyed getting to know her, connected with her character because her situation was familiar to me. In Samoan households, you take care of your parents, no matter how nice or mean they are. You care for your elders and no matter how mean Sophie’s parents were, no matter how pissed off she got, she stuck by them and she took care of them. She was strong and she was loyal and I really enjoyed seeing her come into her own and fight for a little independence.

Getting to know Jude was a treat as well because he was everything I was hoping he’d be when we first mete him in Bittersweet. His struggles were real and his story wasn’t easy but it was honest and I thought Bowen did a fantastic job of putting the reader in Jude’s shoes. I was right there with him through every struggle, through his bout at the hospital and I was rooting him on at every turn. I loved him even when he was being a dumbass.

The romance between Jude and Sophie was great. I loved seeing them learn each other all over again and fall in love with the people they were now and not the people they were in the past. I was talking to Nath about this book after we both finished it and Nath said something that I agreed with. She wished that certain things didn’t happen in the end as Jude and Sophie’s story wrapped up. She didn’t think it was necessary and while I agree that it wasn’t necessary, I didn’t mind it. My favorite thing about a Sarina Bowen book is the real life problems her characters go through and the very real way in which they deal with their problems. Their problems start off overwhelming and with each passing page, she wraps you up in their worlds and makes you the biggest of cheerleaders. It was no different in this book. Not only was I cheering Jude on to make it through to the other side but I was also cheering Sophie on to figure out what she wanted to do and to stand up for herself with her parents.

This was another stand out effort from Sarina Bowen and I really enjoyed it. I wasn’t sure I would like this series as much as I liked her Ivy Years series but I love these guys. So freaking much. I can’t wait to find out who is Zach’s heroine. I have my theories and I have my hopes for who it is so I’m very much looking forward to the next book.