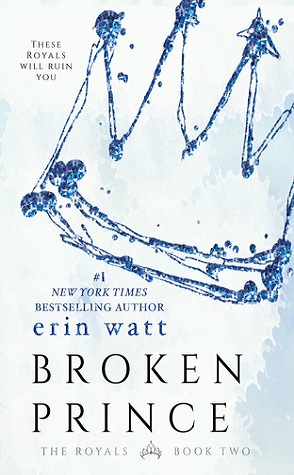 From wharf fights and school brawls to crumbling lives inside glittery mansions, one guy tries to save himself.

Reed Royal has it all—looks, status, money. The girls at his elite prep school line up to date him, the guys want to be him, but Reed never gave a damn about anyone but his family until Ella Harper walked into his life.

What started off as burning resentment and the need to make his father’s new ward suffer turned into something else entirely—keep Ella close. Keep Ella safe. But when one foolish mistake drives her out of Reed’s arms and brings chaos to the Royal household, Reed’s entire world begins to fall apart around him.

Ella doesn’t want him anymore. She says they’ll only destroy each other.

Secrets. Betrayal. Enemies. It’s like nothing Reed has ever dealt with before, and if he’s going to win back his princess, he’ll need to prove himself Royally worthy.

Broken Prince is the second book in the Royals series by Erin Watt, the author pen name for Jen Frederick and Elle Kennedy. It’s also the second book by them that has turned me into a bloodthirsty bitch. This is some serious guilty pleasure type shit that I just can’t get enough of.

This book picks up right where the first book left off and I was glad about that. I don’t think I could have handled any more waiting to find out exactly what happened in that bedroom that Ella walked into and ran out of. I needed things to make sense and Watt did a great job with all of that.

The Royals are on a quest to find Ella. She took off and hasn’t been home since she found Reed in a compromising situation that hurt her heart. Reed needs to find her to make things right because everything she feels for him, he feels it too but right now, she doesn’t think he does and she probably won’t believe him but the important thing is getting her back and bringing her home because that’s where she belongs. He’s so wrapped up in finding Ella that things at home and at school have gone to the crapper.

He really couldn’t give a rats ass to be honest. His sole focus is on Ella and when she comes back home (against her will, of course), his focus shifts to fixing his relationship with her. Reed knows that he’s not good enough for Ella but his feelings for her are so strong that he’s not going to let her get away. Winning Ella back is what he wants most in the world and he will do whatever it takes for her forgiveness. It’s not going to be easy but it will be worth it.

There’s so much that goes down in this book from the power shift at school to Ella’s feud with Jordan to fighting at the wharf and don’t even get me started on the shenanigans with Brooke and their father. The adults in this series need a swift kick to the nuts because holy crap, how dumb are all of them? And then that bomb at the end of story? Both of the bombs that are dropped at the end? I just can’t even with this series. There’s so much that pissed me off, so many people that I wanted to choke out but goodness, I loved a lot of them (cough Easton cough)

This book is a roller coaster ride of high drama and a lot of minors doing some really effed up stuff but I couldn’t get enough with Paper Princess and that wasn’t all that different in this book. I still love me some Reed, I still love the other Royals in all of their effed up glory and I cannot freaking wait until I get my hands on Twisted Palace because I have every faith that Jen and Elle are going to pack more punches that will keep me gasping and swooning at every turn but I know that I’m going to love it too. Gah. So good.