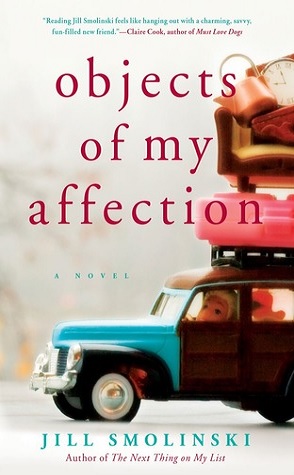 In the humorous, heartfelt new novel by the author of The Next Thing on My List, a personal organizer must somehow convince a reclusive artist to give up her hoarding ways and let go of the stuff she’s hung on to for decades.

Lucy Bloom is broke, freshly dumped by her boyfriend, and forced to sell her house to send her nineteen-year-old son to drug rehab. Although she’s lost it all, she’s determined to start over. So when she’s offered a high-paying gig helping clear the clutter from the home of reclusive and eccentric painter Marva Meier Rios, Lucy grabs it. Armed with the organizing expertise she gained while writing her book, Things Are Not People, and fueled by a burning desire to get her life back on track, Lucy rolls up her sleeves to take on the mess that fills every room of Marva’s huge home. Lucy soon learns that the real challenge may be taking on Marva, who seems to love the objects in her home too much to let go of any of them.

While trying to stay on course toward a strict deadline—and with an ex-boyfriend back in the picture, a new romance on the scene, and her son’s rehab not going as planned—Lucy discovers that Marva isn’t just hoarding, she is also hiding a big secret. The two form an unlikely bond, as each learns from the other that there are those things in life we keep, those we need to let go—but it’s not always easy to know the difference.

Found this little gem in the library the other day and was in the mood to take a break from the psychological thriller binge that I’ve been on lately. So glad I picked this one up! Objects of My Affection is a perfect book to have when spending a relaxing day reading. l really admire the fact that the author, Jill Smolinski, was able to bring some heavy topics such as mental illness (hoarding, depression, etc..) and substance abuse to the table, but still make the story enjoyable and even humorous at times. The book had just the right balance so that the story didn’t get “heavy”. (for lack of a better word..)

The book is about a woman who is facing her own share of life challenges after achieving her “5 minutes of fame” for writing a book about organizing. Her love life has gone down the tubes, she has just sent her son to rehab, and she is newly homeless when she is contacted by a man who is the son of the infamous Marva Meier Rios – a reclusive painter with a secret hoarding problem. He approaches her with an opportunity that couldn’t have come at a better time….organize his mother’s home while maintaining absolute secrecy about her “problem”. She is given a deadline, a couple guys to help haul things off, and a HUGE assignment. With not much of a choice and the thought of “how bad can this be?” she accepts. What she finds is a eccentric woman who is very used to having her way, and who has a very hard time letting go -of everything!

That being said, I do want to say that this book is SO much more than my little blurb above. Like I mentioned, it does deal with some serious issues as well. The way the author presents them and makes them readable is what I think I enjoyed most about the book. The characters are so real and easy to relate to, and I really enjoyed the various personalities. Just wanting to know what was going to happen next made this a hard book to put down.

At first I thought this book was going to be a fluffy beach read, but I found that it wasn’t that at all. It was a book about people. About people trying to let go but yet hold on at the same time. It was a book that I will remember and bring up in conversation. It would make a fantastic book club read as well. This was my first book by Jill Smolinski, but it won’t be my last. I would definitely recommend it to my “bookie” friends.

2 responses to “Guest Review: Objects of My Affection by Jill Smolinski”