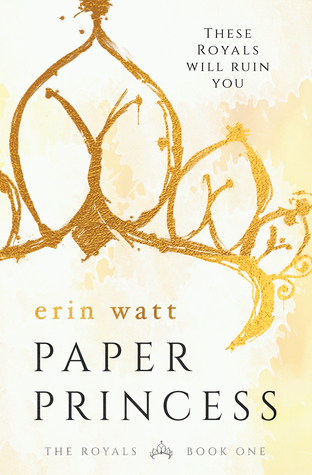 From strip clubs and truck stops to southern coast mansions and prep schools, one girl tries to stay true to herself.

Ella Harper is a survivor—a pragmatic optimist. She’s spent her whole life moving from town to town with her flighty mother, struggling to make ends meet and believing that someday she’ll climb out of the gutter. After her mother’s death, Ella is truly alone.

Until Callum Royal appears, plucking Ella out of poverty and tossing her into his posh mansion among his five sons who all hate her. Each Royal boy is more magnetic than the last, but none as captivating as Reed Royal, the boy who is determined to send her back to the slums she came from.

Reed doesn’t want her. He says she doesn’t belong with the Royals.

Wealth. Excess. Deception. It’s like nothing Ella has ever experienced, and if she’s going to survive her time in the Royal palace, she’ll need to learn to issue her own Royal decrees.

Two of my favorite New Adult authors wrote a book together and I have been anxious to get my hands on it ever since I found out. I’ve been hearing good things about this book everywhere that I go and I went into it thinking that I was going to get one of those guilty pleasure books that is filled to the brim with drama and memorable characters. I’m happy to say that that is exactly what I got.

Ella Harper’s Mom just died of cancer and she’s never met her Dad so she’s on her own. Her plan is to work as much as she can to scrape by, graduate from high school and stay under the radar so that she doesn’t find herself in the foster care. She just wants to work hard, get good grades and hopefully land a scholarship for college. She wants a life she can be proud of and she’ll do whatever it takes to get it. If it means that she has to work as a stripper to make money than that’s what she’ll do. Everything was going according to plan until Callum Royal shows up and ruins everything.

When Callum offers Ella a chance at a bright future, Ella decides to go for it because what else she does she have to lose? She was prepared to keep her head down and get through the next two years with the promise of that future she always wanted in reach but she wasn’t prepared for life as a Royal.

When Ella is introduced to Callum’s five sons, she wasn’t expecting them to hate her on sight but whatever, she’s a survivor. She’ll survive anything they throw her way and she’ll do it with a smile on her face and I think that, above anything else was what I really liked about this book. How strong Ella was. She wasn’t a weak flower who let others get away with treating her like shit. She woke up each morning and just handled her shit. It didn’t matter how hurt she was or how much she was grieving, she handled her shit and made no apologies for it. She faced down the bullies and the whispers behind her back and she just went about her business.

Reed Royal was a mystery that I wanted to solve. I can’t wait to delve into his story in the next book. I wanted to know everything about him and his brothers. What in the hell happened to make him act the way that he does? Because hands down, Reed Royal was a complete dick to Ella when she first shows up in town. The shit that him and Easton did to her made me want to punch their lights out but as the story continues, for some reason (I have no idea what reason) your heart softens toward him. There’s a story behind all of his sneers and his cold attitude toward everything and everyone and I want to know it all. The Royals are an interesting bunch and I want to know everything about all of them. Easton, the twins and Gideon. What in the world is Gideon’s story? Who is the girl that Easton is in love with but can’t have? What’s the real deal behind Reed and that cliffhanger? I know there is one and I’m so bloody excited for the next book.

There’s a lot of stuff packed into this book. Lots of drama, lots of angst and a whole lot of attitude but Erin Watt did a great job of making room in the story for it all. It didn’t feel like too much, too soon. The story at the center (Ella finding her way in this new world and trying to navigate this new attraction to Reed Royal) doesn’t suffer with all of the other additions to the overall story being told. Whoever said that this book was a mix of Cruel Intentions and Gossip Girl hit the description right on the head because that’s exactly what this book reminded me off. It had the best parts of both movie and TV show and I’m wrapped up in it all. I need more…now. If you’re looking for a book with a deliciously cruel and interesting cast of character, look no further. This is for you. 🙂

WARNING: THERE IS A CLIFFHANGER IN THIS BOOK!