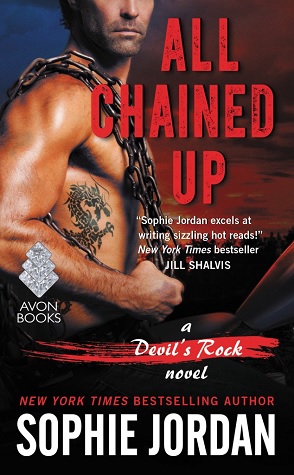 There are bad boys and then there are the men of Devil’s Rock . . .

Some men come with a built-in warning label. Knox Callaghan is one of them. Danger radiates from every lean, muscled inch of him, and his deep blue eyes seem to see right through to Briar Davis’s most secret fantasies. But there’s one major problem: Briar is a nurse volunteering at the local prison, and Knox is an inmate who should be off-limits in every way.

Knox feels it too—a shocking animal magnetism that drives him to risk his own life to protect Briar’s. Paroled at last, he tries to resist her. She’s too innocent, too sweet, and she has no idea what Knox is capable of. But a single touch can lead to a kiss—and a taste . . . until the only crime is denying what feels so right . . .

“When the prison doors are open, the real dragon will fly out.”—Ho Chi Minh

I never knew I wanted to read a prison romance until Sophie Jordan came out with one. I was a huge fan of the early seasons of Prison Break and I shipped the hell out of inmate Michael Scofield and Nurse Sara Tancredi so coming across this book made me sit up and take notice. I was ready for some angst and serious sexual chemistry and I’m happy to say that Sophie Jordan delivered the goods with this one.

I didn’t know what to expect from this book but I went in with high hopes and I ended up quite satisfied with this read. Briar and Knox were not what I was expecting but I didn’t mind. I actually really enjoyed both of their stories. Knox has been in prison for the last eight years and when he gets injured after a fight that lands him in segregation and is sent to the HSU (Health Services Unit), he comes across Nurse Davis and he’s attracted to her.

Briar Davis is a nurse trying to make her way. She’s saving up to buy a house of her own so when she gets offered some overtime work at the prison, she’s not all that excited to take the job but take it she does. The very last thing she thought would happen in a prison of all places happens and Briar is trying very hard to not think about a certain inmate. But when the unthinkable happens, Knox Callaghan becomes a huge part of her thoughts. Thanking him becomes important to her but when she returns to the prison to thank him in person, she finds out that he’s gone. He got parole and is out.

Briar didn’t think she’d ever run into Knox and Knox thought he’d seen the last of Nurse Davis but when they do run into each other, all the delicious sexual tension that was always around them amps right up…because there’s nothing to stop them from acting on that tension. Well, except the fact that Knox was guilty for the crime that he was charged and sent to prison for. That’s not something that Briar can easily look past but the more time they spend together, the more important Knox becomes to her.

This was a great start to a series that I’m mighty curious about. I’m glad that I read it because it had all of the goodness that I loved from Prison Break. I liked the way that Knox’s past was handled and I loved the heck out of him. I loved that he tried to do right by Briar but like I keep saying…the heart wants what it wants. I really enjoyed watching these two come together in love and I’m so looking forward to the next book. Reid!! Holy shit!! OMG!! I can’t wait!

All Chained Up
Hell Breaks Loose

One response to “Review: All Chained Up by Sophie Jordan”