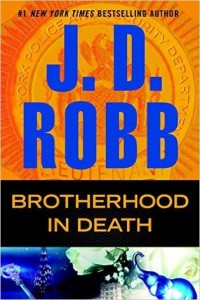 Edward Mira is a powerful man, with a lot of enemies. But when the former senator is violently abducted, Lieutenant Eve Dallas suspects his kidnap is more personal than political. Someone is seeking justice; the bloodier the better.

Edward's cousin Dennis was injured during the abduction - and that makes things very personal for Eve and her husband Roarke. Dennis is a beloved friend, married to NYPSD's top profiler Charlotte Mira.

But as Eve delves deeper into the case, dark secrets emerge that could tear the family apart. Edward Mira has friends in high places - and they all seem to be hiding something. As her investigation takes a shocking turn, Eve finds that not all victims are innocent, and that some bonds are forged not in friendship, but in blood.

Brotherhood in Death wasn’t what I was expecting, yet it made complete sense by the middle of the book.

Dennis Mira and his cousin, Edward Mira, are in a dispute over their grandparents house. Dennis made a promise that the house would never be sold. Edward on the other hand is doing everything he can to sell the house. When Dennis heard that Edward was meeting a Realtor, he headed to the house immediately. When he got there, he heard arguing. When he called out, the arguing stopped. After entering the house, Dennis goes into the study and sees Edward badly beaten. When he goes to help, Dennis is knocked in the back on the head, sending him into unconsciousness.

When he awakens, Edward is gone and he has a hole in the back of his head. He immediately calls his wife who is none other than Dr. Mira (if you read this series and don’t know Dr. Mira, you must live under a rock). Dr. Mira immediately calls Eve even though it’s a missing person case instead of a murder.

Eve is sure that Edward Mira will turn up dead within 24 hours and it turns out she’s not wrong.Tortured beyond belief. It doesn’t take Eve long to put the pieces together, including the fact that at least two women are responsible for his brutal torture. The only question is why? When another, then another ends up as dead Senator Mira, Eve is finally slapped in the face when what the women are doing and why. You’ll have to read the book yourself 😉

I love the In Death series. Eve and Roarke are one of my favorite romance couples. I especially like when they fight, which is sick, I know. But how do you go through a marriage with no bumps along the way? I like reading about the bumps Eve and Roarke go through because they always fall back on logic. As an illogical person, it’s something that’s fascinating to read. Even after years of being married to Roarke, Eve still doesn’t understand the rules of marriage. The give and take. It’s not because she doesn’t try, she just doesn’t know.