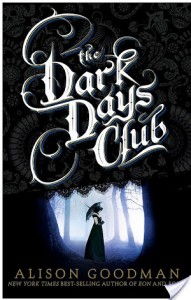 Helen must make a choice: Save her reputation, or save the world.

London, 1812. Eighteen-year-old Lady Helen Wrexhall is on the eve of her debut presentation at the royal court of George III. Her life should revolve around gowns, dancing, and securing a suitable marriage. Instead, when one of her family’s maids disappears, she is drawn into the shadows of Regency London.

There, she meets Lord Carlston, one of the few able to stop the perpetrators: a cabal of demons that has infiltrated all levels of society. Carlston is not a man she should be anywhere near, especially with the taint of scandal that surrounds him. Yet he offers her help and the possibility of finally discovering the truth about the mysterious deaths of her parents.

Soon the two of them are investigating a terrifying conspiracy that threatens to plunge the newly Enlightened world back into darkness. But can Helen trust a man whose own life is built on lies? And does she have the strength to face the dangers of this hidden world and her family’s legacy?

Set in the glittering social world of the Regency upper-crust, the Dark Days Club is a supernatural adventure that introduces New York Times best-selling author Alison Goodman’s Lady Helen Wrexhall—another heroine whom, like Eona, readers can take to their hearts.

From the Hardcover edition.

A fun book with a nice historical romance/paranormal romance mix. I loved the Regency setting, the supernatural elements, and the main character. Although I felt like some of the romance cliches were played, ah, a little too straight. Especially considering there were some other tropes that were delightfully skewed.

Right off the bat, I loved this book’s main character. Lady Helen just struck me as so…normal, which is a bit of an odd thing to say in a book about demon hunters. She’s about to start her first society Season in London, and she’s got some scandal in her family’s past, so she’s worried her uncle/guardian is going to marry her off to the first man who makes an offer. Helen doesn’t actually mind the thought of getting married (being a product of her time), but she wants to enjoy a full Season, or maybe even two, and wring everything she can out of the experience (being, well, and 18 year old girl). After reading so many YA books full of girls balking at marriage because reasons, or historical romances full of spinsters balking at marriage because contrivance, I just found Helen’s attitude so natural and normal that I wanted to hug the book. (So I did.)

She continues to be so blessedly a normal person even while discovering she has weird traits like super strength and near-mind-reading powers of observation. Honestly, she’s the best thing about this book, I love her to bits.

Of course, then we get the worst thing about this book, Lord Carlston. He’s the only thing that can make Helen act…not refreshingly normal. He’s dark and brooding and rude and just so typically romance hero that I roll my eyes whenever he comes on the page. Which, in and of itself, wouldn’t be too bad. He’s a trope, whatever, they happen. But any time he’s on page with Helen she veers off into heart-fluttering and “oh my goodness”-ing and near-obsession that…frankly, just lacks chemistry. For most of the book I was reading it as a one-sided crush instead of a romance because he never acts like anything other than a brooding mentor around to look hot and teach her demon hunting skills. So all her flibergitting about him felt very forced and very “for the sake of romance genre conventions.” (Of course the heroine has to fall for the forbidden bad boy, whether they have chemistry or not!) Really, she should have ended up with that nice duke guy, they had much more going for them.

The plot was rather slow, which was fine at first because it fit the writing style and the setting nicely. Helen goes through her society stuff, slowly realizing that there’s something interesting going on with herself, curious about this Lord Carlston guy who keeps showing up and putting her to very odd tests. Around the middle of the book, about the time the demon hunters should have been able to just say “we’re demon hunters,” they kept dragging things out instead. Setting up elaborate “chance” meetings so they could show her things instead of just explaining them, that sort of thing. And while we got some nice action at the end and some good set up for further installments, I don’t feel like much really got accomplished in this book.

I would still recommend it, though, especially for anyone who likes Regency era fiction. The supernatural elements were interesting, even if they did take a while to get to, and there were so many female relationships. Helen’s main friendship is with her maid, one of the mysteries is about a missing maid, Helen’s feelings about her deceased mother feature prominently, her relationship with her aunt is both nuanced and bittersweet, and in general Helen just spends a lot of time talking to ladies. And I am so here for that.

(She still should have married the duke, though. Carlston-shmarlston. He’s got too many issues anyway.)