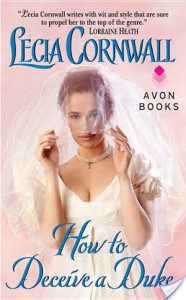 Lecia Cornwell wowed readers with her historical romance debut, Secrets of a Proper Countess, which Publishers Weekly called a "seductive read." This hugely talented author has launched an enchanting new series with How to Deceive a Duke, a captivating Regency romance featuring a lady who stands in for her runaway sister as the Duke of Temberly's bride—a deception the duke will exact a passionate price for from his new wife!

Writing in the tradition of bestselling authors such as Lorraine Heath and Elizabeth Hoyt, Lecia Cornwell is sure to satisfy fans of sensual and smart historical romance.

This book started off great, I loved it so much. I especially loved so many things about Meg. But then, about halfway through the book…it became pretty clear that what you see on the summary is about all the book has. Once the deception/wedding night goes down, the rest of the book just sort of flounders around aimlessly, grasping at subplots.

It’s a shame, because that first half is so good. It has, hands down, the best virgin sex scene I’ve read in this genre. Meg was getting married out of desperation, but also from the start she was eager and curious when it comes to marital relations. And on the night in question, she, ah, carried on with the curiosity. ^_~ I loved her mix of ‘learn-by-imitation’ and naivety.

Nick…Nick had some interesting potential. I really loved the internal conflict set up for him – he was a layabout wommanizer but after going off to war and growing up he finds he’s chaffing under his old reputation. He gets himself in a lot of trouble by churlishly assuming everyone else is assuming things about him. That’s a fun set up to play with. But he…just was way too mean to Meg at the start for it to be just a bout of peeves, as the book wants to imply. And then after the wedding, he only got worse and worse, treating Meg like crap and even abandoning her! (For the war, but still! You don’t! Go to war! Without! Telling! Your WIFE! Who you supposedly love by this point!)

So, yeah, Meg will always be one of my favorite heroines, but I wish she’d been given a better book to play in.