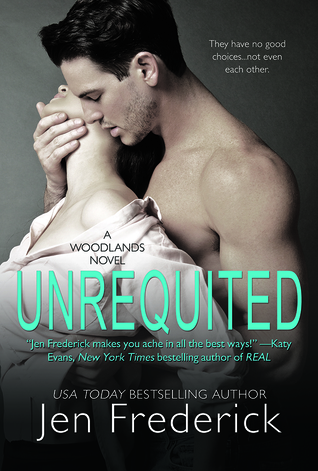 Winter Donovan loves two things: her sister and her sister's ex boyfriend. She's spent her whole life doing the right thing except that one time, that night when Finn O'Malley looked hollowed out by his father's death. Then she did something very wrong that felt terribly right.

Finn can't stop thinking about Winter and the night and he'll do anything to make her a permanent part of his life, even if it means separating Winter from the only family she has.

Their love was supposed to be unrequited but one grief stricken guy and one girl with too big of a heart results in disastrous consequences.

I’m still all about the Jen Frederick right now. I can’t get enough of her stuff and Unrequited was another great story that I fell right in with from the very beginning.

We finally get Finn’s book. Finn has been slowly spiraling out of control, drowning in booze and babes ever since his father died. He hasn’t taken the news of his father’s death too well but one hook up with Winter Donovan and he’s starting to sit up and take notice of just what he’s doing. All of the meaningless hook ups, all of the booze and all around irresponsible behavior isn’t doing much for him and seeing Winter again, hanging out with her again has changed Finn’s outlook on everything but it’s a little too late to come to that discovery because now that he’s decided he wants Winter…she’s not on board with his plan.

Winter has had a crush on Finn ever since she was a teenager and he was her sister’s boyfriend. It’s not anything she thought would ever become something so she was safe in her crush but it’s been years since she’s seen him and she just couldn’t help herself…she had to have one night with him. Never mind that she’s still thinking about that one night with Finn weeks later. Never mind that he seems to want to pick up where they left off. She can’t think about any of those things because Ivy comes first and she needs her right now.

Oh man, this book was full of angst and a whole lot of swoony Finn things. I wasn’t sure how I’d feel about the whole ex-girlfriend’s little sister thing but Frederick won me over with Finn and Winter. I adored both of them and connected with Winter more than I thought I would. Her whole family loyalty and going above and beyond for her family (even when they weren’t worthy of that loyalty) was well written. I connected with her struggle to keep her family happy at the same time she was trying to be happy for herself with a guy that she had big time feelings for.

I loved seeing how constant Finn tried to be with Winter. No matter what was thrown at the two of them (and there was a lot of things thrown at them), he proved time and time again that she was first wife. She struggled with her feelings for Finn because of her sister but she wasn’t dumb about them. I loved that Finn understood her struggle and wanted to be there for her. He wanted to put her first and ugh, OMG I loved Finn.

Finn was everything I was hoping he would be. He was strong and steady and he knew what he wanted. I loved that his love for Winter never wavered and I loved seeing him win her over.

Winter was a great heroine, it would have been easy to get mad at her for the way she kept Finn at arms length for a bit but I understood why she did what she did. I understood what motivated her but when she finally wises up to her dirty rat of a sister, I was glad that she stood up for herself. I was glad that she was finally living her life and not one that would make things easier for her sister.

This was an emotional book for me and I really enjoyed it. I loved seeing the Woodlands gang, I loved seeing Finn and Adam’s friendship and I really loved the romance between Finn and Winter. Their love wasn’t perfect but it was still pretty great. I can’t wait for Adam’s book and I’m mighty curious to see which girl he ends up with….those love scenes are going to be interesting considering Adam’s choice of jewelry. Haha.