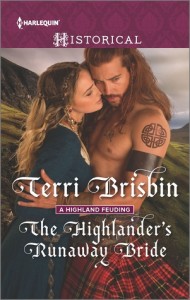 When Eva MacKay learns her father has bartered her off to a warrior from a neighboring clan, she has no choice but to run away, taking her dark secrets with her. Freedom is now within her grasp!

Dutiful highlander Rob Mackintosh tracks down his runaway bride, only to be stunned by the fireworks that erupt between them. For behind Eva's timid smile lies a headstrong beauty, and Rob knows, no matter what, this marriage is going to be full of surprises!

Eva fell in love and that love produced a child.  The day the baby is born, however, Eva’s father takes it from her and expects her to go on as if nothing has happened.  They had traveled far from their home to hid the pregnancy but the minute they get back to their clan Eva’s father announces that he’s marrying her off to someone.  Still sick with fever from the birth of her daughter, Eva takes off to find her little one.

Rob isn’t thrilled that his cousin has promised him in marriage but he loves his cousin and will do anything for him.  He heads to MacKay lands only to find out that his soon to be bride has runaway.  He heads off to find her but when he does she’s injured and still sick with fever.  He nurses her back to health and then marries her.

Eva knows that Rob is a nice guy but she longs for her child (which he still knows nothing about).   She’s dejected and withdrawn but Rob soon pulls her out of her depression and the pair soon find common ground in their marriage bed. When Rob finds out Eva’s secrets, however, it may be the end of the love that’s flourished between them.

Well, this was certainly not what I though was going to happen when I read the blurb to this book but I was pleasantly surprised with the story.  I liked Rob a lot, even though near the end he has his oh-my-god-you’re-a jerk moment.  He wasn’t thrilled about marrying Eva but was determined to make the most of it and actually found himself falling in love with her.  It was very sweet but also pretty heart-wrenching for him as he just couldn’t seem to make her happy.

Poor Eva.  My heart just broke for her because of all that had happened to her.  I hate that it did but I SO wish that she would have been forth-coming with Rob when they started getting closer.  I felt she should have known by then that he was a good guy and would understand but her father, the bastard, threatened to kill her daughter if she ever said a word.  Instead he found out another way and then twisted it all up in his head to be something it wasn’t.  Such a horrible start to the marriage but it all ended well in the end.

The book was a sad one that hurt my heart but was well done and definitely enjoyed reading it.

Stolen by a Highlander
The Highlander’s Runaway Bride 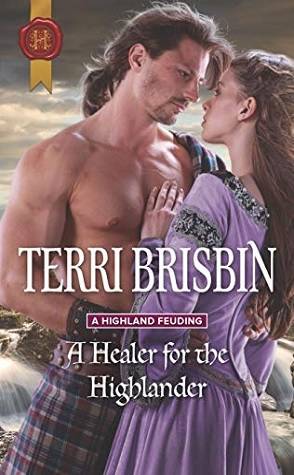