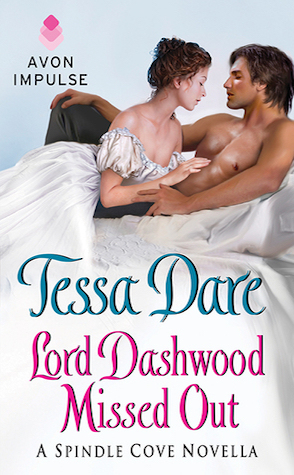 A snowstorm hath no fury like a spinster scorned!

Miss Elinora Browning grew up yearning for the handsome, intelligent lord-next-door…but he left England without a word of farewell. One night, inspired by a bit too much sherry, Nora poured out her heartbreak on paper. Lord Dashwood Missed Out was a love letter to every young lady who’d been overlooked by gentlemen—and an instant bestseller. Now she’s on her way to speak in Spindle Cove when snowy weather delays her coach. She’s forced to wait out the storm with the worst possible companion: Lord Dashwood himself.

And he finally seems to have noticed her.

George Travers, Lord Dashwood, has traveled the globe as a cartographer. He returned to England with the goal of marrying and creating an heir--only to find his reputation shredded by an audacious, vexingly attractive bluestocking and her poison pen. Lord Dashwood Missed Out, his arse. Since Nora Browning seems to believe he overlooked the passion of a lifetime, Dash challenges her to prove it.

She has one night.

I heart Tessa Dare. I also heart her Spindle Cove series and I didn’t know much I missed her characters from that series until I read this novella.

The women of Spindle Cove are preparing for an author’s reading at the library and they’re all excited. You see, the author is a young woman named Miss Elinora Browning who wrote a book called Lord Ashwood Missed Out. It’s a story about a young lady who fell in love with the dashing Lord Ashwood and he left without farewell and broke her heart. Her story became quite popular and now she’s got speaking engagements and is traveling around, making quite a living as a young authoress.

She’s on her way to Spindle Cove when the weather takes a turn for the worse and the only coach available is a private coach with someone already on board…and that person is none other than Lord Ashwood, I mean Lord Dashwood. The villain in her story. Haha. It’s like karma is out for blood because not only is she stuck on a coach with a very pissed of man, they fall into a ditch and the wheel breaks and so they have to find some place to hide out TOGETHER until the morning and the weather clears, so they can fix the wheel and continue on to Spindle Cove. To say that things got real interesting, real fast is an understatement.

As entertaining as the main romance was, I’ve got to be honest and say that I was much more interested in what the old characters were doing, namely – the men. Holy cow, I didn’t realize how much I missed Colin Sandhurst until he started talking in this book. I laughed like a crazy person every time the men came onto the scene. When they go out in the bad weather to track down the author and escort her to Spindle Cove, I could not stop laughing. The name they came up with for themselves? Holy cow, I laughed so much.

I’d definitely recommend this book to fans of the series and to fans of Tessa Dare in general. She’s a fantastic writer and though this isn’t my favorite book by her, it’s still a treat. Colin’s book is on my to be re-read this year list. I can’t wait!

2 responses to “Review: Lord Dashwood Missed Out by Tessa Dare”