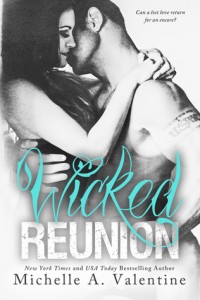 College sweethearts London Uphill and Jared Kraft were inseparable. He was a rising baseball star with a promising future, and she seemed destined to become “Mrs. Kraft.” Then a tragic night and a series of devastating mistakes caused Jared to walk away from his life, leaving London without any explanation and tearing the couple apart.

Five years later, Jared has reinvented himself by putting down the bat and picking up a guitar to play for the red-hot band Wicked White. In all that time, London hasn’t gotten over her forever love—or the pain—despite seeking solace in the arms of the one man no one dreamed she’d run to.

When Wicked White’s lead singer goes MIA, Jared finds the time—and courage—to return to his hometown and face the mess he made. He’s shocked at how London’s life has changed, yet he’s determined to prove their love is worth fighting for. Is this breakup too big for any hope of a reunion tour? Or can London open her heart to Jared once again?

Jared and London are the perfect couple. Together since Jr. High School they are practically inseparable and love each other very much. Jared is getting scouted at his current university and the future is looking so rosy Jared asks London to marry him. Of course she says yes.

Then tragedy strikes. The weekly phone call from Jared’s dad who is stationed in Afghanistan doesn’t arrive and they find out he’s been killed. Jared freaks out. I don’t mean he’s screaming and crying, I mean he freaks the fuck out, refuses to believe the info and takes off in his car where he then tries to buy drugs. It’s so completely against his personality and everything that we’ve come to know about him that it doesn’t seem right. He gets caught buying and all hell breaks loose. He gets put in jail and loses his scholarship at school. He starts drinking heavily and is incredibly rude and mean to London who is only trying to help and console him in his time of grief. He eventually takes off without telling anyone goodbye or where he’s going and pretty much doesn’t talk to anyone for five long years.

In that period of time he started playing his guitar with a band and is signed – becoming a member of the ever popular Wicked White. When the lead singer goes missing (see book #1 in the series) after his mother dies it gets Jared thinking about his own mother. He heads home to see her (which he hasn’t done in 5 long years) but he’s not ready to see his brother, Wes, or London.

While in town he helps his mom by making deliveries for her candy business and ends up making a delivery to London’s house. They’re both shocked but London lets him in to try to find out what happened with him. Despite the fact that she has never stopped loving him she had gotten married (to his brother Wes, no less) but it had only lasted a few months. She just couldn’t get over Jared and they both knew it wouldn’t work. That didn’t stop Wes from trying. Jared never stopped loving London either and they decide to work things out but a shocking revelation may have her heading back to Wes for good.

I really liked book one in this series so I was interested to see what this book would be about. Jared seemed like a complete asshole in book one so I couldn’t fathom how Valentine was going to make him into good hero materiel. Frankly I’m not sure she did.

Jared started off great. He was kind and polite, respectful to London and his mom, and was the kind of nice guy that just wouldn’t go off the deep end. Obviously death makes each person react differently and Jared took his father’s death really hard. I just couldn’t seem to wrap my head around the way he did it. It was SO out of character as to be hard to grasp. He turned into a complete ass and from all evidence stayed that way for about 5 years. I didn’t think he had really dealt with everything when he and London got back together. I mean, he wasn’t even planning on seeing her during his trip home but yet then tells her he never stopped loving her. Really? Got a funny way of showing it.

London was kind of sad. She had pined for Jared for years but then accepted his brother’s marriage proposal in the hopes that she could move on – knowing full well she couldn’t. I was kind of pissed and annoyed with her all at the same time. When the story threw the “shocking revelation” at us I was beyond done with the characters and their clusterfuck. I didn’t understand any of the characters reactions and just wanted London to stand up for what she wanted. Jared and Wes were siblings but in constant competition – frustrating.

The story was a mish mosh of WTF, OMG and Holy Shit. It wasn’t written badly which is why I ended up giving it three stars. I mean, any book that can keep me reading after all that happens is worth that third star, right? I can’t say that I’d necessarily recommend the book. I suppose if you like high drama with lots of yelling, fighting and crying then you’d like this book – otherwise? No.