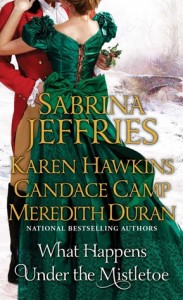 Stunned by the heat of an unexpected kiss on a cold winter’s eve, two strangers from vastly different worlds turn hotheaded principles into burning passion in Sabrina Jeffries’s delightful yuletide story, "The Heiress and the Hothead".

In the snowy Scottish countryside, Karen Hawkins’s rakish duke has an unforgettable holiday encounter in "Twelve Kisses" when the alluring lady he surprises under the mistletoe is not who he expected, but a long-lost love with a score to settle.

In "By Any Other Name", Edinburgh is aglitter for Christmastime as Candace Camp sends a curious gentleman in hot pursuit of an intriguing lady in disguise—one who refuses to reveal her true identity, though she fears he has already stolen her heart with his kiss.

In "Sweet Ruin", will the festive spirit of the season sweep Meredith Duran’s feisty heroine beneath the mistletoe—and back into the arms of the dashing rogue whose carelessness soiled her reputation and sent her into exile in London?

In this all-new story collection sparkling with sexy charm and heartwarming wit, four beloved bestselling authors reveal the mix-ups and make-ups, the missed chances and golden opportunities that come but once a year.

Whitley’s review of What Happens Under the Mistletoe by Sabrina Jeffries et al.

The Heiress and the Hothead

A sweet enough story, about a reporter who’s tackling inhumane working conditions in mills and a woman who owns a mill.  They get off to a bad start when the reporter (quite understandably) is wary of anyone who runs a mill, and our American heiress’s delicate sensibilities are upset by this. (Okay, so, clearly I’m biased in their argument.  The whole thing had shades of #NotAllMillOwners to it.  And FFS, the guy wasn’t even all that offensive; it felt like the woman was just upset that the reporter guy didn’t immediately assume she was an angel.)  Once they got over their Required First Meeting Misunderstanding and down to the business of shutting down the local, heinous mill (and making out a lot in the process), things got a lot better.

A noble at a masquerade plans to kiss his mistress under the mistletoe, but his old lover is dressed in the same costume and Murphy’s Law applies.  After being caught in such a scandalous embrace, the two try to go get the woman’s father and convince him to help ease the gossip, but they’re stuck in a snowstorm instead.  They find a secret cabin in the woods (it makes sense in the end, really) to hide out, and that’s when things actually get interesting.  I could have done without the party set-up, as it doesn’t seem to have added anything and all the good stuff was during the storm.  I very much enjoyed these two characters fighting and slowly discovering what broke them up as a couple before the story’s opening.  It was a very believable, human sort of misunderstanding, and they were sweet while working it out.

By Any Other Name

I straight-up DNFed this crap.  The guy is an unrelenting jackass and the whole setup is creepy as all get out.  The girl is cross-dressing to try and find her wayward brother, who likes to hang out in gambling halls.  The guy saves her from a mugging attempt and discovers her true gender.  All is well and good, except then the girl repeatedly, emphatically says “Don’t try to find me, leave me alone, stop, no, don’t” while the guy just gleefully runs around tracking her down and stalking her to various events anyway.  I stopped after the guy realized she’d told him a lie and he mournfully thought “well, that must mean she wasn’t interested in me.”  NO, SHITHEAD, ALL OF HER REPEATED CRIES OF “STOP FOLLOWING ME” MEAN SHE’S NOT INTERESTED, WTF IS WITH GUYS WHO IGNORE BOLD-ASS STATEMENTS AND THEN READ 8000 MEANINGS INTO RANDOM ACTIONS YOU ARE AN IDIOT AND I HATE YOUR FACE.

Without a doubt my favorite short story of the bunch.  The lady is the daughter of a diplomat who has to play hostess after her father is called away from a house party.  One of the guests has stolen an important document, so her father sends in one of his (ish) employees to help covertly search for it.  Only Daughter and Employee had a bit of a fling a few years ago which ended badly, so they are none too pleased to see each other.  I loved the interactions between these two.  So cutthroat while staying (technically) civil.  And while they find out that their breakup was a misunderstanding, said misunderstanding isn’t dragged out to the point of frustration.  It’s handled perfectly, with just enough double-talk to make you cry “no, mush faces already!” but before that gets old they do.  And the ending when they confront the conniver that broke them apart was beautiful.  A+, perfect short story.

Throwback Thursday Review: How to Abduct