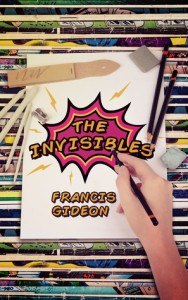 Mike meets Johnny and Ray during the first week of high school just as 9/11 happens. When they can't deal with what's occurring in real life, the three boys skip class together and bond over comic books and movies instead.

From there, Johnny and Mike grow closer and end up forming a friendship. When Mike realizes that Johnny has his own "secret identity" like the superheroes he loves, the two become even closer. But in order for Johnny to truly open up about being gay, Mike has to figure out what's so special about the superheroes he loves, and why being invisible is the best superpower there can be.

Mike is new in school as a freshman and hasn’t really made friends yet. On September 11, 2001 the school is in turmoil and Mike ends up together with fellow freshmen Johnny and Ray. They skip school and go to Ray’s house to watch tv. Mike and Johnny seem to have more in common and Mike finds himself liking Johnny more and more. As the trio continue to skip they become better friends but Mike looks at Johnny as more than a friend and he finds that maybe Johnny is looking at Mike in the same way.

This was a very short story about three very different young men who find themselves together. Ray and Johnny were once neighbors and that’s how they had become friends. They had no problem adding Mike to the mix but from the start Mike felt something more for Johnny. Johnny wasn’t sure what it was he wanted but the comic books that the pair looked at was something they had in common and eventually comic were what brought them together on another level.

I found the story to be very touching and though provoking in that the three kids were trying to make sense of the world in general but especially after 9/11. To them it didn’t affect them too much but it was still there making them think.

A short but pretty sweet YA m/m story (kissing only) that I enjoyed.

One response to “Guest Review: The Invisibles by Francis Gideon”