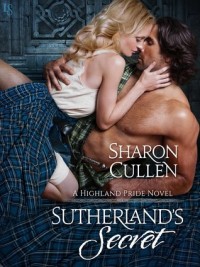 Terror reigns in the aftermath of the Battle of Culloden. As British troops obliterate the last traces of the Jacobite cause, Brice Sutherland, the Earl of Dornach, risks everything to arrange a covert escape route to Canada for his fellow Scots. But when he encounters a dying Englishwoman, hauntingly beautiful though scarred by manacles and unable to speak, Brice’s true courage is put to the test. Nothing but ruin could result from helping her, or worse: falling in love.

The pampered daughter of a Marquess, Eleanor Hirst was the talk of the London season when she wed the Earl of Glendale. Little did she know that his posting as an officer in Scotland would be their undoing. Now her husband is dead and Eleanor is a fugitive in a hostile country. Desperate for help, she throws herself on the mercy of Brice Sutherland, a handsome Scottish warrior who should be her enemy. Instead, he cares for her tenderly, reviving her shattered spirit—and awakening urges unlike any she’s ever known.

Brice Sutherland is traveling a road to his lands when he sees a pile of rags in the road. When he goes to investigate he finds that it’s a woman and he believes that she’s so close to death she won’t make it through the night. He decides to take her with him so that she won’t have to die alone and the woman surprises him and rallies. Brice takes her home but she’s skittish and he can tell that she’s been abused in more ways than one. It turns out that a colonel in the British army wanted her for himself so he killed her husband and then tried to take her for himself. She refused him so he imprisoned her but she managed to escape.

Though Eleanor can’t talk when she first gets to Brice’s home, Dornach, she is soon making herself comfortable by being useful. She finds herself loving being a different person than the insipid, naïve woman she used to be. She also finds herself getting quite close with Brice as he helps her sleep through the nights and survive her nightmares. They get closer and closer but there are many things standing in the way of the two being together. Eleanor decides she must leave for Canada as the colonel who is searching for her, Blackwood, will never give up the search for her and when he finds her she knows she’ll die.

This was a great story. The premise, the tension that is created between Brice and Eleanor, the unknown aspect of Blackwood, Eleanor and Brice’s growing love – it all coalesced into a well written book.

Eleanor had been a pampered London miss who was raised to be that way. She didn’t know any better and by her own admission had been selfish and snobbish. Once she sees the inside of dungeon and experiences the horrors there her world and priorities changed. When she meets Brice he changes her mind even further about what she wants out of life and I loved seeing the way she grew throughout the book.

Brice was a wonderful hero. He was kind and thoughtful, generous with his feelings and his time and I loved almost everything about him. Though he wasn’t involved in the battle of Culloden and hadn’t chosen sides he was sympathetic to the Scottish people who were being terrorized by the British soldiers. Because of that he was helping people leave Scotland for Canada. He risked his life for those he didn’t know and it made me love him even more.

The book was so good and kept me on the edge of my seat as well as warmed by heart with the romance. If you love a good 18th century Scottish historical then you won’t want to pass this one by.