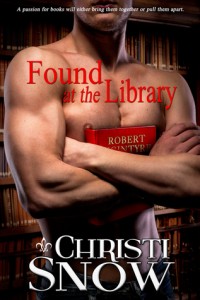 His entire life, Tommy Garrett has dealt with self-doubts. He thought he’d conquered the majority of them until a chance meeting with an author brought his illiteracy to the forefront...again. Growing up with un-diagnosed dyslexia has left Tommy barely able to read, but books are his Nirvana. Now he spends his life creating art dedicated to the love of those “untouchable” items.

Robert McIntyre, Mac, is a best-selling, highly celebrated author. But his point of view has become a little bit too narrow...until Tommy opens his eyes. That chance meeting has changed everything about his world. He has no idea how to find the beautiful man he met, and offended, at the library book sale. But when he does, Tommy’s life is in crisis-mode. It’s the holidays and Mac can’t just standby when Tommy needs help, whether Tommy wants it or not.

Life is hard, and sometimes when conflict arises you have to write your own plot twist to pull yourself out of the fray.

Author Robert “Mac” McIntyre is at the library helping out with the Friends of the Library sale when he’s asked to help a buyer with his purchases. They carry the books out to the truck and Mac is instantly smitten by the man named Tommy. He asks Tommy out on a date but Tommy refuses.

Two months later Mac’s agent takes him to a gallery exhibit and Mac is enthralled with the artists’ work. He especially loves a piece that the artist did for one of Mac’s own books and wants to buy it but it’s not for sale. He does some digging to find out where to find the artist, T. Garrett, as the man wasn’t at the exhibit due to a family emergency, and what do you know? He finds that T. Garrett is the Tommy he met at the library two months earlier.

The family emergency that Tommy had was his brother who overdosed and is still in a coma. Tommy has been up for days and everything around him is put by the wayside while he stays at the hospital. Mac decides to help and this includes bringing Tommy food while he stays at the hospital and stealing the key to his house/shop so that he can run it while Tommy’s otherwise occupied. This goes on for days.

When Tommy gets home from the hospital and it looks like his brother will be fine with some serious counseling, he discovers what Mac has done and freaks out – asking Mac to leave as he’s not sure what’s going on and frankly a bit scared. The man he found himself falling for is someone he’s not sure he now knows.

This story was sweet at times and others – just a bit creepy.

Mac was a kind man – I had no doubt of that – but the way he went about “helping” Tommy was so over the top and probably illegal it bordered on disturbing and stalkerish. I knew that it all came from a good place but just taking dinner to Tommy and getting to know him would have been great. The fact that he took over his shop? Rearranged displays and wrote down ideas for future displays? IDK that just rubbed me the wrong way. He was infiltrating himself into a man’s life and he really didn’t know the guy at all. Who does that?

Tommy reacted appropriately to it all, I must say. I was happy to see that he just didn’t say, “Aw, isn’t that sweet,” and move on. He realized it was more than odd and acted properly. He did let Mac back into his life immediately and that was good – they could then get to know each other a bit.

One of the parts of this book also included Mac writing a book that was supposed to get his feelings out – the ones he had for Tommy – after he had met him at the library. Now, Mac didn’t know Tommy from Adam when he was writing but it seemed he was already in love and that didn’t set well with me. Of course when Tommy finds out about the book and how it ends he’s upset and again sends Mac away. Mac being the kind man he is gets Tommy back in a pretty romantic way and weaves the issues with his book around the whole deal. This was pretty ingenious and I liked the way Mac went about reeling Tommy back in to his life.

Overall the book was part sweet and sexy – part strange and unsettling – but it was entertaining.