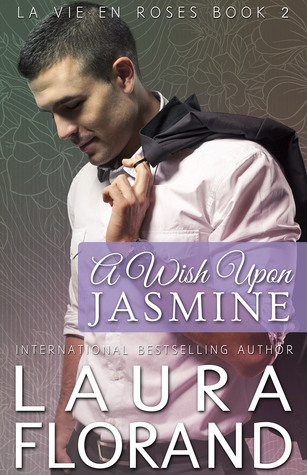 Reviewer: Jen
A wish Upon Jasmine by Laura Florand
Series: La Vie en Roses #2
Also in this series: A Crown of Bitter Orange

From Reviewers’ Choice Book of the Year nominee and bestselling author Laura Florand:

Ruthless. That was what they said about Damien Rosier. Handsome. Wealthy. Powerful. Merciless. No one messed with his family, because to do so they would have to get through him. No one thought he had a heart. Not even the woman he gave his to.

Cynical. That was what they said about Jasmin Bianchi. A top perfumer of her generation, Jess had achieved commercial success by growing a protective shell over a tender heart. The one time she cracked it open to let Damien in, he crushed it—after a night of unbelievable passion.

Lovers. That one magical night couldn’t survive the harsh light of dawn. When Jess woke up to discover the man in bed beside her had stolen her company, she fled.

Enemies. Now she’s come to the south of France with a threat to his family heritage. If he wants to reclaim both it and the woman who walked away from him, he’s going to have to fight as dirty as only Damien can.

But Jess knows how to fight dirty, too. And these days, she has nothing left to lose.

Certainly not her heart.

Come explore the south of France, a world of heat and fragrance and tales as old as time, through the stories of the five powerful Rosier cousins and the women who win their hearts. A Wish Upon Jasmine, book two in Florand’s addictive new series, La Vie en Roses. “Explosive, sensual, and utterly sweet” (Eloisa James).

Why didn’t any of you tell me that book 2 in this series was out?!? I missed out on 5 solid months where I could have been drooling about a trip to France and sighing over hot af Damien. Hmpf.

This book is the romance of Damien, another cousin in the perfume-dynasty Rosier family. Everyone sees him as the cold, ruthless businessman of the bunch, and while that’s certainly part of who he is, it turns out there’s a lot more in him than just ruthlessness. When perfume designer Jasmin (Jess) Bianchi inherits an old perfume shop belonging to the Rosier family and the two meet again, we find out that they had a one night fling in New York previously. The experience was extremely important to both of them, but because of a series of misunderstandings, bad timing, and insecurities on both their ends, they were driven apart and now see the other as an adversary. There is still a strong pull there, but can they both put aside their own vulnerabilities and have the courage to let someone else see the real them?

I adored Damien and Jess together. Jess has had a fairly lonely life. While she was close to her father, she had no other family, and when her dad died she was entirely alone. She has learned to protect her real self under a sarcastic, disdainful exterior. Damien too hides a lot from the world. He truly has a sweet, caring, and idealistic element to him, but he’s not just playacting the ruthless businessman role either. He genuinely loves making money and gaining the power that comes from it. I really enjoyed his complexity and felt like it added a depth that we don’t always see in heroes. His love for Jess doesn’t “reform” him and show him that money and business isn’t important; instead, his love shows him that he is more than just making money and that hardness and softness can co-exist within him. It was lovely.

That’s the love, but let’s talk about the sex, because I am a little conflicted. The sex in this book is hot and definitely spicier than the other Florand books I’ve read. Damien is complex both in and out of the bedroom. He seems to like to dominate during sex, and while he has tender moments too, he does enjoying being the boss, likes things just a teeny bit rough, and likes a little dirty talk. I felt like that absolutely fit with his personality and made 100% sense. I suspect some people will have some issues with him, though. First, there is a scene when Damien and Jess are still antagonizing each other, where he describes what is essentially a fantasy rape. He doesn’t exactly describe Jess as unwilling in the fantasy, but neither does he describe consent. He’s doing it intentionally to hurt Jess’s feelings (though the joke’s on him because they both get turned on, and I never once got the sense that he would ever actually want non-consent), but it’s kind of icky nonetheless. Then, there is their mutual, consenting sexytimes where Damien does his dirty-talking, dominating thing. Jess is absolutely on board and thinks it’s hot, so that is not the issue. I guess I just had a little trouble jumping right into it without any conversation about it. Is this something Damien always enjoys in sex, or is this something Jess brought out in him? Plus, Damien seems sort of angry when he’s commanding Jess to do dirty things and bossing her around. He even says he’s still hurt about her behavior after their one night stand. That planted a tiny seed of doubt in my mind–was he just into mildly “dirty” sex because he liked it (cool), or was he actually angry and punishing her with sex (maybe not-as-cool)? In the end, I decided that Damien had done so much to show his true character in the book, and all the stuff outside the bedroom pointed to a caring, good-hearted guy with a bit of a hard edge, so I chose to assume that was who he was in the bedroom too. Plus, Jess was not the slightest bit troubled by it, and in fact she realizes that she craves that hard edge during sex, too. I fully recognize others may have a different takeaway.

It’s been a long time since I read a book that made me so desperate to jump on a plane. Florand’s descriptions of the French countryside are evocative and utterly gorgeous. As I was reading, I was reminded of another one of my favorite writers, Sarah Addison Allen. Even though Florand doesn’t use actual magic in the books, the way she describes smells and textures so vividly and the dream-like quality to some of her scenes is very reminiscent of Allen’s magical realism.

I can’t wait to keep reading about these cousins and dreaming about fields of jasmine, cobblestone lanes, and lovely scents in the air.

Once Upon a Rose
A Wish Upon Jasmine
Untitled #3

3 responses to “Guest Review: A Wish Upon Jasmine by Laura Florand”